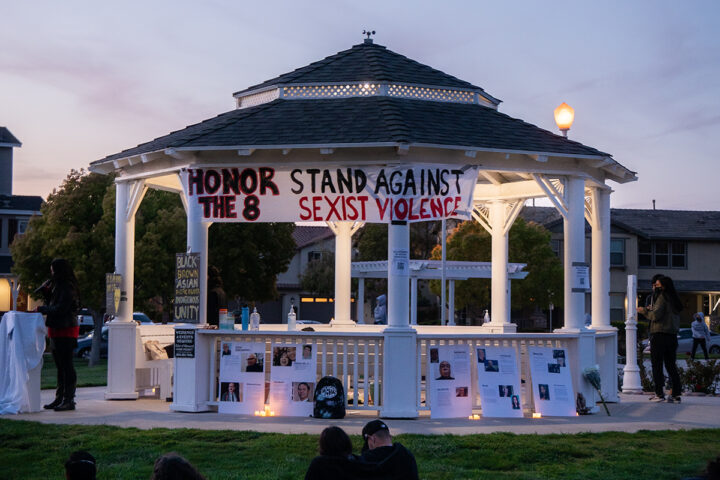 On April 3, a vigil was held in Oxnard for the victims of the Atlanta spa shootings, as well as other victims of AAPI racism.

The event was held at Central Park in the Riverpark neighborhood and was organized by the group 805 AAPI Solidarity, an organization based on “cultivating AAPI solidarity, and amplifying the voice of AAPI’s in the 805,” according to their Instagram page.

The vigil started with opening remarks from CI students Sophie Nguyen, a senior sociology major, and Aurora Rugerio, a second year environmental science and resource management major. These two are the organizers of 805 AAPI Solidarity and had put together the vigil.

“Aurora and I decided to take further local action outside from school, because we have not seen nearly enough solidarity with our AAPI community in the 805,” Nguyen told The CI View. So, the two formed 805 AAPI Solidarity, and within two weeks, they planned and held the vigil.

“We gather today to honor our Asian American and Pacific Islander community members who have passed due to anti-Asian and AAPI racial violence — those whose lives were lost in such a disgusting and gruesome and painful way,” Nguyen opened the event with.

Following the opening remarks were the words of several different community leaders: Cindy Liu and Alice Chou of WeBelong:805, Kelvin Hau Canche of the Social Justice Fund for Ventura County, Ventura County Supervisor Carmen Ramirez and Oxnard City Council Member Gabe Teran. The speakers offered words of solidarity to the AAPI community, as well as their experiences as AAPI community members and allies.

“We cannot be bystanders… we can do something. We have to speak out, act when necessary, call people out, check our neighbors. This is Oxnard — Oxnard has a unique history of immigrants from Asia for many, many generations,” Ramirez remarked to the crowd of about 150 people.

The vigil was then led through a guided meditation and moment of silence by community member, Jennifer Benitez. This moment of healing and respect began with the passing of candles as their lights illuminated the park at dusk in remembrance of the lives lost too early. These candles were later placed by posters commemorating each life and a community altar prepared by Benitez.

Several community members were called to speak of their experiences as Asian Americans and Pacific Islanders. Personal stories of race-based violence, support and hope alike were shared. Included in these speakers was CI’s performing arts lecturer, MiRi Park. “In the face of violence, sometimes the most revolutionary action can be to make something — sing a song, dance, paint, build,” Park said to the gathering.

This event acted as a forum for these voices to share, connect and find solidarity. However, just as importantly, it was a time for a community to heal. “For any group that’s impacted, I think it’s important to realize that healing is an incredibly important aspect in the antiracism work we do,” Nguyen told The CI View. “In the wake of painfully skyrocketing violence; we feel that it is critical we allow ourselves time and space to grieve our own pain and the pain of our parents and ancestors who may have never had this space to heal.”

The vigil ended with closing statements from Rugerio and Nguyen, with Nguyen sharing a powerful reading of a poem she wrote. Lamenting the deaths of those lost to AAPI racism, she spoke out. “Silence in the face of injustice is complacency, and complacency disgusts me. It’s depressing. But what we have right here tonight — this is beautiful. This is community. This is compassion.”

Following the event, Rugerio said, “(I)t was so impactful listening to members of AAPI communities share their experiences on how living in America was like… It was truly powerful seeing community members share their stories and share how proud they are to be AAPI.” Nguyen shared her appreciation as she said, “We want to thank our supporters and sponsors; Cindy Liu of WeBelong:805 and Martha Martinez-Bravo, the Executive Director of the Social Justice Fund for Ventura County.”

Concerning future community events, Nguyen told The CI View, “(W)hen time allows, perhaps in the summer, we would love to help build more community spaces, beyond the vigil… As we work to fight for social justice and political advancement it is so crucial we create wholesome spaces that feel real and raw. Spaces where we could have discussion circles, time to connect, and focus on challenges and unique our diverse communities.”

People who have experienced or witnessed anti-AAPI racism in their own community are encouraged to report incidents to stopaapihate.org. In addition, CI offers support to those struggling to deal with racism, identity or any other issue through the Multicultural Dream Center, as well as through CAPS.

“This is just one step. We need to do so much more, but this one step is a step of hope,” Nguyen said.