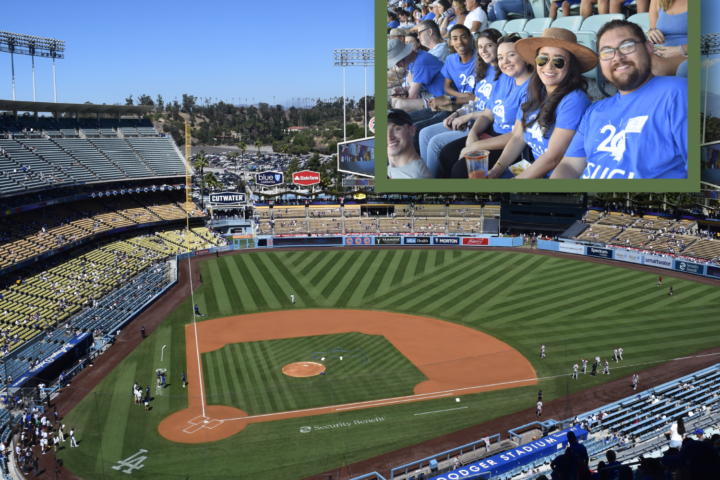 On September 25, the CI family, in commemorative blue t-shirts, witnessed President Richard Yao’s first pitch and the victory of the Los Angeles Dodgers. The 17th annual Dodger Day was hosted by Alumni & Friends Association at the Dodger Stadium, where we bonded with CI pride.

President Yao threw the ball straight to the catcher, making the perfect start to the game versus the St. Louis Cardinals. The Dodgers scored a double in the first inning and made the score 2-0. When it was 3-1, catcher Will Smith singled in the bottom of the three innings, and center fielder Cody Bellinger had a double in the third inning, leading to their fourth score. Both teams continued defending and the game was over in the ninth top. The stadium was filled with excitement of victory after a 4-1 win over the Cardinals.

The CI students, alumni, faculty, staff and friends had seats in the same section, fostering a united feeling throughout the game. Many spectators knew about the event via the website and emails and were already Dodger fans, giving them the perfect reason to attend the event.

Ismael Gómez, a CI alumnus who just graduated this year, found out about Dodger Day when he was browsing the website. He “thought that was interesting because a lot of (his) friends are Dodger fans so (he) wanted to come and see.” Likewise, first-year pre-nursing major Summer Dale, said that she “knew about it actually before the school year started and (she likes) the Dodgers a lot.” Leslie Davila, in her sixth year at CI for the teaching credential program, found out about it through the website, too, and is a Dodger fan because of her family.

Evelyn Taylor, who graduated from CI in 2015, came here for a more unique reason. She has been coming to Dodger Day for years and came back after the pandemic, saying, “Actually, me and my friends are like the face of Dodger Day, if you go on the CSUCI Dodger Day you’ll see our faces, so we thought, ‘Hey, why not come back this year.’”

For Dale, the affordable ticket prices encouraged her to attend. She continued, “I thought that was huge, and I was going to be coming to a game over this summer, but the tickets were super expensive, and I just thought the opportunity to come now.” She also thought it would be cool to see President Yao’s first pitch.

The attendees were having fun not only because they are Dodger fans but also because they were with their CI community. Gómez said, “Seeing so many dodger shirts, I was so excited.” Taylor was also feeling the community and said, “(It’s) cool to see all the CI alum here … and see if we recognize people and it’s just awesome being here today.”

The atmosphere in our section was something special. We were connected as a CI family, cheering together, and in the end, we witnessed the win of the Dodgers. I hope to see familiar attendees and feel the excitement next year, too. We all agree with Gómez, who said, “This is definitely the first year I’m here, and it’s not the last year.”