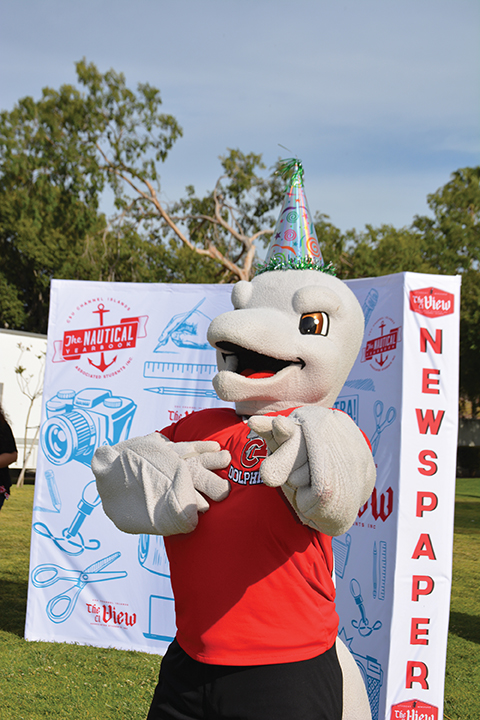 For the first time ever, CI’s mascot, Ekho the dolphin, is hosting a Birthday Bash to celebrate their birthday. The celebration will be held on Wednesday, May 2 in the Student Union Courtyard and will have a variety of fun activities and snacks for partygoers to enjoy.

So, when was Ekho founded? “May 13, 2013,” Tarah Chase, a Spirit Squad Student Assistant, said. She continued by stating that this year, “Ekho will be five!”

For those who have not yet met Ekho, they can often be found attending events and supporting student activities across campus.

Chase explained that in 1998, CI’s official mascot was voted to be the dolphin, due to their prevalence around the Channel Islands and their significance to the Chumash tribes. Originally, CI’s mascot was a dolphin named Tsunami, but the name was changed.

“(The name) was changed around 2011-2012 because of the tsunami that took place in Japan,” Chase said. “They felt the name was insensitive and inappropriate … so the ASI (Associated Students Incorporated) chair took a poll to find a new name for the mascot.”

The name Ekho was finally decided on in 2013, not just because of the echolocation abilities that dolphins possess but also because it represents the student voice.

“Ekho actually means ‘voice’ in Greek, and as members of the CI community students’ voices are sought and supported,” Chase explained. “As students, we have the ability to speak up and make change if we wanted to. Ekho stands for the students finding their voice.”

For those who have not yet met Ekho, they can often be found attending events and supporting student activities across campus. Always willing to stop for pictures or a high-five, Ekho represents the CI spirit of inclusivity and community and is always willing to meet new people.

Ekho’s Birthday Bash is open to all students, faculty, staff and members of the CI community. The party will be held on May 2 from 11 a.m. to 1 p.m. in the Student Union Courtyard. There will be games, food and raffles to celebrate Ekho’s fifth birthday.
To find out more information about Ekho and the Birthday Bash, go to csuci.edu.