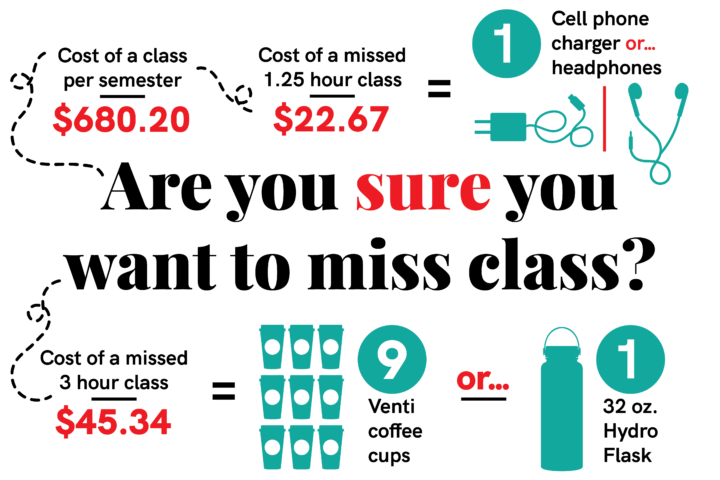 All colleges have a set tuition that students are expected to pay, but it is not necessarily broken down by course. It is seen as an overarching fee, students must pay to attend, but some students may be questioning what the true worth of a class session is, aside from checking off an attendance requirement. Here are the calculations for how much a single class session technically costs you.

CI’s semester tuition and fees come out to $3,401 for an undergraduate who is taking more than six units. The tuition fee is primarily used for funding the delivery of instruction and faculty as well as staff wages, even in a virtual world. According to Anna Benscoter, manager of Student Business Services, some of the other fees, such as the Health Facilities Fee and Materials, Services and Facilities Fee, go towards maintaining campus buildings and funding the equipment necessary for classes.

Considering that the tuition and fees go towards funding the tools ultimately necessary for delivering instruction, and students have to pay all the fees regardless in order to attend classes in the first place, it would safe to add the entire amount into the calculation of a single class session.

A three-hour class has the worth of going out to eat at a nice restaurant with a friend, buying a couple of movie tickets and concessions, getting a Hydro Flask, acquiring a Bluetooth padlock that opens with your thumb, getting an OtterBox case for your phone or filling up on gas. You could buy new clothing of some kind, such as a shirt, pants or shoes. One could also acquire approximately nine venti Starbucks drinks for that amount of money, or more depending on the size. It could also be worth a video game or two, especially if they are older, used or on sale.

A one hour and fifteen-minute class costs a bit less, but that worth is still equivalent to a couple of fast-food meals, one adult ticket to the L.A. Zoo, a book or two, a candle making kit, a mini-waffle machine, a stainless-steel travel mug, board games, a water bottle, a lamp, an Uber ride, a new phone charger, a magnetic car mount for a phone or even headphones. It is approximately worth a premium month subscription to any streaming site service, or even two months if you count a free month trial.

Of course, this is all based on if a student is taking five courses. The tuition and fees would be the same even if a student were only taking three courses that were three units each, so that would increase the worth of each class. For example, taking four courses would make one three-hour class session worth $56.68.

For a student getting a credential, the tuition and fees come out to $3,860 for those taking more than six units. That comes out to $51.46 for a three-hour class and $25.73 for an hour and fifteen-minute class, if we calculate it based on five classes. Tuition and fees for someone taking less than six units in this category is $2,462, which brings a three-hour class to $82 and an hour and fifteen-minute class to $41, for two courses worth three units.

For whatever reason that a class may be missed, it still holds some financial value from students’ tuition, even if it does not affect grades. Tuition is invested in maintaining the campus environment and paying salaries and wages in order to keep instruction going, even in a virtual environment.

All tuition and fees that students pay fund the campus operations for delivering instruction and provide the necessary tools to succeed in those courses. Paying for these courses is paying for more opportunities, and each class session should be a step further into learning and gaining the full student experience. Putting this into the mindset of money invested for each class session may alter some perspectives of where student resources are going towards.