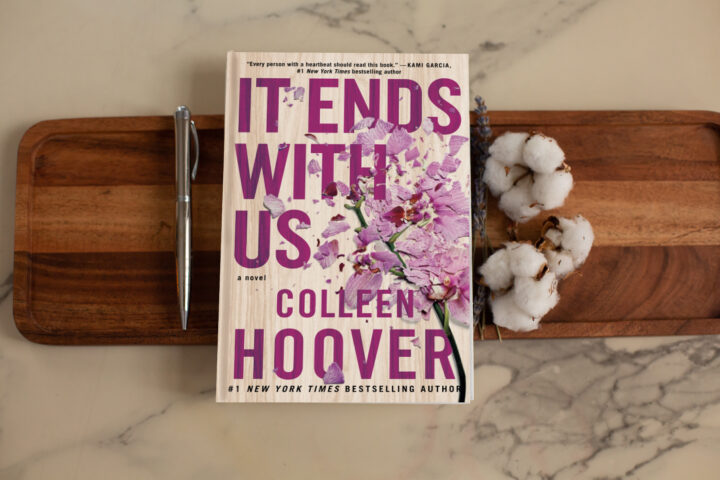 “Cycles exist because they are excruciating to break. It takes an astronomical amount of pain and courage to disrupt a familiar pattern.” -Colleen Hoover

Colleen Hoover, a young adult author, has risen to prominence in bookstores and on social media in the last few years. Her works span genres from romance to paranormal, but one book in particular has the potential to open up life-altering conversations for people. It is especially relevant to those who are college-aged and may be getting into serious romantic relationships.

“It Ends With Us,” published in 2016, seems like a heart-warming romance novel at the start. Lily Bloom, a recent college graduate, has just moved to Boston when she meets a handsome neurosurgeon named Ryle Kincaid. Part One of the novel follows the course of their relationship as the two fall in love and become intertwined with one another’s lives. Hoover also gives some insight into Lily’s experiences growing up in an abusive household and her encounters as a teenager with a homeless boy named Atlas.

In Part Two, the novel’s true nature reveals itself. Lily and Ryle’s picture-perfect life begins to unravel after they get married, when Ryle becomes jealous of Lily’s fondness of Atlas. In his anger, Ryle begins to physically lash out at Lily, who finds herself trapped between her deep love for her husband and her fear and hatred of him.

This novel breaks the reader’s heart in real-time along with Lily’s as the plot unfolds. While reading, I, like Lily, desperately wanted to believe that Ryle would not hurt her again, as he tearfully promised her after each time he became abusive. Lily’s desire to make their relationship work conflicts with the knowledge that she should leave Ryle. She gains a newfound respect for the struggle endured by her mother, who was also a victim of domestic abuse during her marriage to Lily’s father.

Hoover masterfully reveals Lily’s inner struggle as she comes to understand the complexity of leaving an abusive relationship. At the novel’s beginning, Lily looks upon people like her mother with a mixture of pity and disgust, not understanding why they would not just leave their abusive partners. By the end, however, Lily demonstrates the immense resilience that it takes to live in a situation such as her own. She ultimately proves the depth of her strength by making the extremely difficult decision to break the cycle of abuse, declaring that “it stops here.”

I recommend that anyone and everyone read this novel; I truly believe that it has the potential to change lives and empower people to make the necessary, hard choices in life. The subject matter is intense and painful, but incredibly important. Anyone can make snap judgments about the pain that other people are going through, but until we have truly made the effort to listen to their struggle and let go of our own prejudice, we cannot give them the love and respect that they truly deserve.