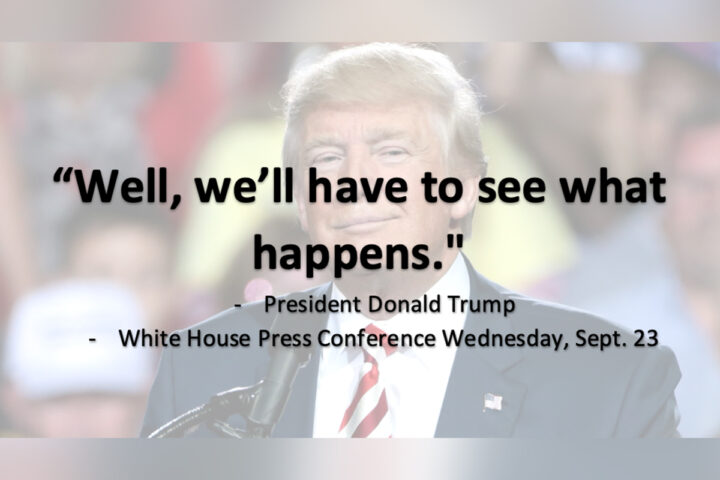 The idea of a peaceful transfer of power is one most readers probably have never thought much about. The respectful departure of elected officials to make room for their successors is a cornerstone of American democracy. Alas, a quick collective look in the mirror shows that we have not resembled that democracy in quite some time.

At a recent press conference, President Donald J. Trump was asked if he would commit to a peaceful transfer of power whether he wins or loses in the coming election. His response? “We’ll see.” As expected, this statement has gained controversy and left many wondering what Nov. 3 will hold.

With the increased turmoil of the country, Trump’s refusal to commit to a peaceful transfer of power in the 2020 election will not only be extremely entertaining in its probable occurrence, but also an excuse to really see how strong American democratic institutions hold up.

Despite the unprecedented events of the past year, contentious elections are not actually new to the U.S. In 1867, America saw President Rutherford B. Hayes elected only after a large electoral college dispute. The election of 2000 led to a Supreme Court decision regarding how votes are counted.

Nonetheless, throughout these events there has always been confidence in the American political system, wherein our elected officials interpret our constitutional laws and elect the proper electorate. The political candidates subsequently respect those decisions. However, what do we do when this standard is threatened? What would it look like if our current president does not respect the American status quo?

Could we end up like Venezuela, with two leaders each claiming the win, effectively sending our democracy into collapse? Probably not, unless the whole world decides to sanction us and we allow our prized economy to spiral out of control. Could we fall into a civil war, playing the wide chasm between left vs. right with an armed conflict? Also, not likely, as long as the vast majority of America continues to respect democratic practices.

So, what truly would happen if Trump does not respect the election outcome? In my opinion, not much will happen. Hear me out: For one, this is not a new statement from Trump. In the 2016 presidential debates, he was asked the same question, and regarding results, he stated that he would “look at it at the time.” Even despite his win, he was still unable to accept the results, claiming there were likely 3 million ballots in his favor that were not accounted for.

At a September 2020 rally, he stated that “based on the way we (Trump’s supporters) were treated,” he deserved more years in office, even beyond his 2024 two-term limit.  On June 19, 2019, his associates released a meme campaign video depicting Trump picket signs written with “Trump 2020, Trump 2024, Trump 2028” and so on until the graceful ending sign finally states “Trump 4Ever.” A classy portrait of a sitting president absolutely disregarding the constitution.

Nonetheless, if a loss for Trump really is in the cards for Nov. 3, I do not believe he will outright seize absolute power and declare his indefinite stay. No, the narrative he proposes will likely be shrouded in complaints over mail-in voting issues such as signatures and postmarks, as well as his pick-and-choose criticisms of the electoral college. These, combined with his army of outspoken supporters, will lead to many states being forced to recount ballots, leaving citizens without a definitive answer of who to call commander in chief for the next four years.

Any functioning democracy, however, should allot as much time as needed to make sure the American votes are accurately accounted for, as well as have support from the more localized elected officials.

Either way, this election is close, and no matter the outcome, it is not going to be pretty. Whether it is 2020 or 2024, in no version of the future could I predict our current President leaving without a performance. If there is one thing Trump has proven to be good at, it is keeping a nation in a state of suspense.

Nonetheless, the actions of this man may define an era of American politics, but I refuse to accept that his words define America as a whole. The institutions that have brought this country prosperity will prevail for the people’s future, even if they must flex their muscles come January 2021. With a little faith in the American democratic system, that is much larger than its individual actors, I think we are all going to be alright.