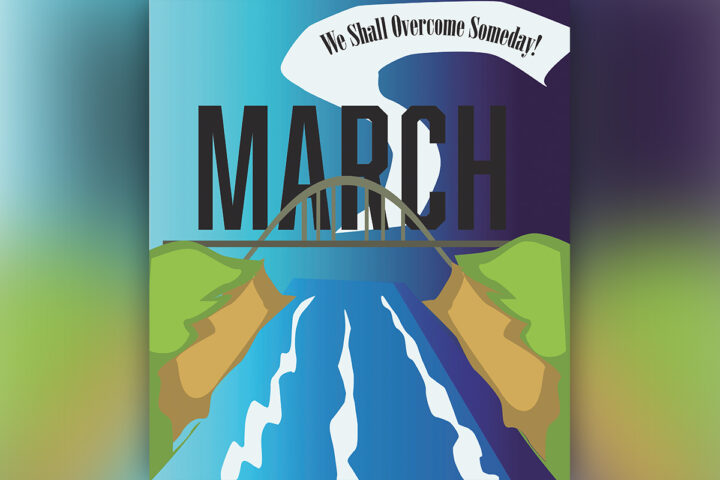 For a long time, when one first thought of comic books, it was always the classic action comics remembered from the early days, back when Marvel and DC would release superheroes soaring in with tight garments and capes, stopping bullets with their chest or using their incredible abilities to stop some evil mastermind from destroying the world. From Batman to Superman and Iron Man, these superheroes graced the comic book shops and continue to demonstrate and inspire us all to be heroes ourselves, powers or not. Yet, today, I am talking about a different type of hero tale, if you will.

I am talking about the comic book series named “March”, written by Congressman John Lewis, detailing his experience as a young boy during the Civil Rights Movement. From its black and white artwork to the simplistic design of the characters, “March” demonstrates how comic books are not just limited to the realm of superheroes, but they can be a great medium to understand history and social injustice as well.

Consisting of three books in the series, “March” begins with a bang, starting us off on a bridge. It is the famous Edmund Pettus Bridge that Martin Luther King Jr. and Lewis lead a crowd of African Americans across, marching towards Montgomery to present their grievances to their governor, and more importantly, as a statement to demand a right to vote.

First, we witness the crowd marching across the bridge, and almost immediately they are stopped and attacked by a large group of police officers. Before one can even fathom what happened, the comic does a great job of simulating a fade to black, transitioning nicely forward in time to January 2009, with us watching an older Lewis preparing for the Inauguration of President Barack Obama.

Our story follows Lewis from books one to three as we see his life change and grow through the Civil Rights Movement, experiencing his incredible and amazing life, as well as the challenges and accomplishments he has experienced along the way. Yet, what it does so well is depict such an important and troubling time in our nation’s history, allowing this visual medium to slowly and cleverly showcase the injustices done to African Americans.

One scene that stood out to me takes place in the second book, with the scene unfolding across several panels and pages, making great use of close-up shots and smaller sized panels to capture the horrible brutality that unfolds as Lewis and company step out of a bus to a large awaiting crowd of angry white protestors, many depicted with clubs. What ensues are pages of violence.

It is these scenes that remind the audience that we are not witnessing some brave hero battling a villain, like the pages unfolding as Superman battles Lex Luthor. Instead, we are witnessing African Americans being beaten by white protestors over and over again. It is a scene that further reminds us of the brutality of this time period, and the brutality that African Americans were forced to faced.

The artist has done well to allow the action to speak for itself, providing only a few speech bubbles containing slurs hurled at the African Americans, as well as cries and screams of terror and fear. It is in these quick moments can we truly understand and even imagine the harsh realities Lewis, let alone every African American faced during that time.

It further brings to mind what is currently happening in our world right now, with the recent incident involving George Floyd, who was killed during an arrest in which one of the police officers knelt on his neck. With this millions of people around the U.S. expressed a desire for change and action, even more so than before.

Yet, it is perhaps this call for action by many people around the world that makes this comic book feel even more important. Throughout the comic, there are scenes that jump back and forth to 2009, the time period Lewis is retelling his life from but—most importantly—it is the year that Barack Obama became our first Black president. It was something that truly affected Lewis, as he expressed in a scene where he hugged Obama, with Former President of the United Stated giving him a note that read, “Because of you John…”

Indeed, one may say it was all because of his efforts for change and justice that lead to such an impact taking part in our nation’s history. As it is, his efforts led to the 1965 Voting Rights Act, among many other changes set forth. It is through his excellent writing voice alongside the artist Nate Powell’s drawings that led to this amazing depiction of events. His art allows us to better understand the historical work playing out.

As a review by Jim Johnson on Comic Book Resources (cbr.com) notes, the artist does great on “the usage of small, scribbled and near-unreadable word balloons in certain instances effectively represent the meaninglessness, irrelevance or lack of attention paid to these words.” Furthermore, it is this use of a black and white shading that allows the scenes to pop, almost echoing a historical photograph or autobiography. However, they also allow one to focus more on the story and message at hand, with one’s eye turned more to the dialogue then the colorful pictures the artist made.

With superhero comics, one often imagines them as action packed and full of complex stories of tragedy and twists but also hope. Thus, pages full of color and brightness would make sense. If one were to take “March” and put that superhero coloring over it, there is a chance it would not be the same.

Perhaps it is best to think of this like the old black and white documentaries, with one’s mind envisioning the old footage capturing the events of World War II. For any historian or fanatic of this era, one does not care for the lack of color or even the lack of poor footage. It is the pure idea of witnessing such a complex time in our history, to learn and study it all.

It is simplistic drawing style combined with the excellence of Lewis’ retelling of his time during this event that proves comics are more than just super heroic tales. In fact, it is through comics like “March” that we can better understand the world and history around us. As told in an PBS NewsHour article, Tim Smyth, a social studies teacher at Wissahickon High School in Pennsylvania, detailed how his classes are “surrounded by images of diverse comic book characters which allows my students to see themselves in these titles. Many students learn to see past the idea that comics are about superheroes in tights and learn instead recognize the current issues the stories seek to explore.”

Furthermore, many teachers within this article go on to discuss how it is this exploration of events that start to allow comics to become not just about superheroes, but can also express and embrace a wider diversity within their fanbase. It also provides students this exploration into topics and events that may be harder through the traditional textbook material. It allows comics like “March” to engage in these discussions with students and adults, combining art and writing to really speak to people.

Overall, the “March” comic book series proves that comics are not limited to the super heroic tales one sees in the old Marvel Action Comics. Comic books have evolved to tell us more complex tales and stories, many that open a new conversation about our nation’s history and the world around us.

Stan Lee once said, “(Comic book fans) take great pains to point out that comics are supposed to be escapist reading, and nothing more. But somehow, I can’t see it that way. It seems to me that a story without a message, however subliminal, is like a man without a soul.”

Our world is full of so many different issues and problems we are still facing today. As Stan Lee pointed out, “None of us live in a vacuum- none of us is untouched by the everyday events about us- events which shape the stories just as they shape our lives.”

“March” could have easily been a story written in your typical autobiography, or even a full-length documentary. But instead, Lewis chose a comic book, and I think that it is a medium that bears mentioning of how effective it can be at detailing these important aspects of our history. The visuals combined with the written account of Lewis pairs so well to provide the message and truth about what he experienced, and what many experienced during the Civil Rights Movement. So, it seems it is not enough to say comic books are limited to the world of superheroes, because as it stands, the real superheroes can be the ones right from our own history.