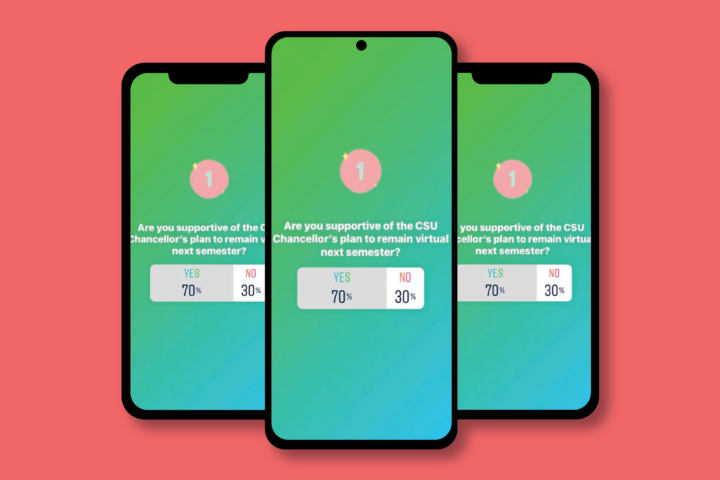 Between the jumbled scrambling that took place last spring semester and the new primarily virtual education students are finding themselves in today, there has been much exasperation in the CI community. With that, there are plenty of conflicting thoughts and concerns regarding the future of CI. According to the letter from CSU Chancellor Timothy White, he officially made the decision to continue forward with primarily virtual instruction for the spring semester beginning in January 2021.

Virtual learning brings forth many obstacles for students, especially for those who may not have excellent living conditions at home or an adapting environment to encourage success in the virtual realm. Problems with internet connection and computers, loud and interrupting noises surrounding them constantly and even distractions cause a dip in achievement for many students now. For some, campus is a place to immerse oneself in an academic atmosphere, and some students have even considered taking a gap year rather than stay virtual.

Nonetheless, despite such calamities, the prospect of safety and reason seem to uphold respect for the decision in many students’ opinion. On The CI View’s Instagram page, students took a poll on if they supported the CSU Chancellor’s plan, and 70% of them were in favor of it out of a total of 54 votes.

“I feel a number of ways about it. Overall, I feel as though that this is the best course of action. Realistically, I don’t think that campuses could meet again next semester, it just feels unrealistic due to the way that this country is progressing, and seemingly failing, to handle the COVID-19 crises,” said Koa Johnson, a fourth-year English major with an emphasis in creative writing and a psychology minor. “The decision honestly doesn’t make me feel any safer, and I think that’s because we are in an area where COVID-19 cases don’t seem to be super high, and I’m working at a grocery store with hundreds of people coming in and out and I haven’t gotten it and neither have any of my co-workers.”

“I’m not entirely pleased with the decision, but I’m not entirely upset with the decision either,” Masaru Wright, a sophomore computer science major, stated. “I’m for it as of now, though it feels a little premature, it makes more sense to be safe than sorry. I think even though we’d all love to do in-person activities, it wouldn’t be very good and I think the COVID prevention rules would be (intentionally or unintentionally) all but tossed out by the students.”

There may be some perks, such as saving time and money on commuting and parking passes. Some programs may be well equipped to adapt to the transition as well. But there still remains the question of if the good outweighs the bad.

Wright said, “I live in San Diego, so it saves me the tuition money used for room and board! The downside is there’s no in-person activities on campus, or any of that ‘essential college life’ to discover because of it.”

Johnson, being an English major, expressed that his major was not too heavily impacted by the virtual transition. However, normal in-class discussions and general communications have been a bit severed. “I’ve adapted pretty well to this semester, considering I’m also working throughout this, but it still makes the college experience much, much worse. I’m not making contacts with my professors, there is a huge disconnect between students and professors that is exemplified through some student behavior, and it just makes for an experience that is subpar,” Johnson said.

Wright said, “The virtual transition’s been alright! Since I’m a computer science major, we’re already mostly doing stuff on the computers so it’s not entirely a hard sell to swap. I’ve adapted since last semester of last year, so I’m fairly alright with that. I think the biggest problem I’ve had with virtual instruction so far is deciding which virtual background I want on a given day!”

From further data collected on Instagram, CI students have also mentioned that many clubs, such as Breaking Pointe Dance Club and the Green Generation Club, have had their normal activities cut away, causing less engagement. One common struggle stems from lack of human interaction.

There have been a few students who felt that despite the frustrations of virtual learning, the CSU Chancellor’s decision is ultimately for the best.

Johnson explained, “As much as it sucks, and isn’t great at all, I don’t think there is a realistic alternative. Social distance classes don’t seem like the right way to go, because of the hallways and the amount of students that need to go to and from various classes.”

“I feel that the Chancellor made the right call, however, I wish there some gradual transition back to the classroom, especially for graduating seniors,” stated Hernandez. “I can at least … ease my mind that I do not have to commute and possibly contract the virus.”

Although, even with the security of safety, there are still some pent-up overall frustrations with tuition costs.

“The only other thing I have regarding the decision is if the costs of tuition will go down slightly!” Wright said. “I get that it’s the same as using the campus and the resources on campus (just via computer), but as I’ve heard it put, ‘Why are we paying for all this for what’s basically Khan Academy?’ I’m not saying make it free for everyone, just maybe a snip or two on some fees for things that we’re not using these semesters.”

Johnson said, “I’m living off-campus, but still paying rent so I’m not saving any money and they are still charging tuition the same even though we quite literally don’t have access to many of the facilities/services that are stated within the tuition payments.”

Overall, the impending danger of COVID-19 is a big enough threat that most students can understand why CSU Chancellor White made the decision to keep instruction primarily virtual throughout next semester. The biggest concern appears to stem from the unfairness of a full-package college experience being ripped away so suddenly by this pandemic, yet being charged the same price. Students now get over a year of denied in-person communication with friends and professors. However, guaranteed safety should be made a priority, and with the uncertainty of what may come, this decision holds some merits.