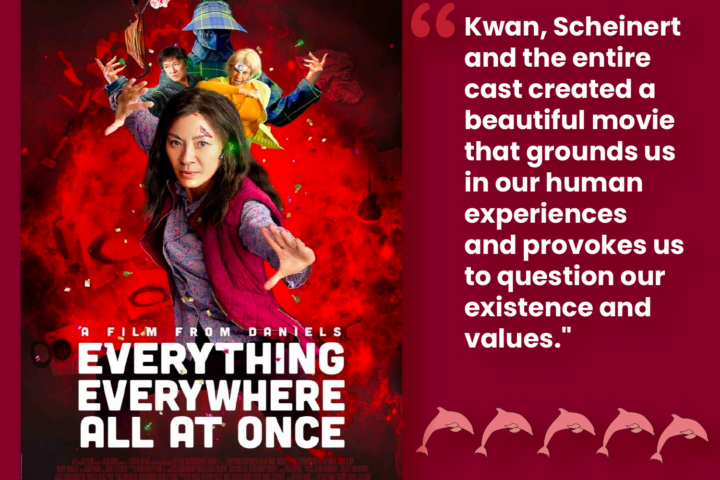 A24 released the heart-wrenching and mind-altering “Everything Everywhere All at Once”  in theaters in March of 2022. Written and directed by Dan Kwan and Daniel Scheinert, this movie has elements of action, fantasy and comedy in three parts: “Part 1: Everything,” “Part 2: Everywhere” and “Part 3: All At Once.”

The movie follows the Wang family, starring Michelle Yeoh as Evelyn Wang, Stephanie Hsu as Joy Wang and Ke Huy Quan as Waymond Wang. The Wangs own a laundromat but are running into financial troubles and have an upcoming IRS audit. Evelyn is up against the wall with laundromat troubles, the arrival of her father from China and her naivety to her husband’s attempts to serve her divorce papers, amongst the other minor but persistent challenges of every day. On top of that, she is in constant conflict with her daughter, Joy, who wishes her mother would understand and accept her being lesbian and not conforming to her mother’s outdated standards.

During their appointment at the IRS office, Waymond is taken over by a different version of himself from another universe and he calls Evelyn to action. He claims she is the only one who can stop a vengeful individual, Jobu Tupaki, from corrupting and destroying every universe and everything in them. To combat Jobu, Evelyn “verse-jumps,” seeing and embodying versions of herself from different universes — from the universe where she is a kung fu master to the one where everyone has hot dogs for fingers.

The themes of this movie include chaos and fragmentation, optimistic nihilism and immigrant parent-child relationships. As an immigrant, Evelyn experiences chaos and fragmentation as she splits her identity between lands, cultures and universes. It is amplified by the navigation of personal and professional relationships and matters, as well as the struggle between being who she was raised to be and who she wants to be. The movie’s great epiphany is in correlation with the tenets of optimistic nihilism. It artistically portrays how nothing matters in the grand scheme of the universe, and because nothing matters, we should be genuine in the way we live and love. The last theme highlighted seems to have touched the most viewers, as Evelyn and Joy chisel away the barriers of cultural differences and learn to embrace one another.

Everything Everywhere All at Once’s LGBTQ representation, display of Chinese culture and the immigrant/child of immigrant experience made it an engaging and relatable movie. The attention to detail, like the inclusion of a prop stool that many Asian families have and Evelyn’s struggle with English pronouns since Chinese language conventions differ, enhances the humanity of the film.

Kwan, Scheinert and the entire cast created a beautiful movie that grounds us in our human experiences and provokes us to question our existence and values. It highlights the undermined experience of immigrants and their families. The film has already won awards in the SXSW Film Festival and Hollywood Critics Association Midseason Film Awards and was nominated for more this year.

As the child of Asian immigrants, I see myself in this movie — I see my story and experience validated, and it is my favorite movie to date. I am excited to see the movie receive the recognition it deserves with more nominations and as more people watch it now that it is on streaming platforms like Amazon, Apple TV, Google Play and Vudu. I highly recommend seeing this movie. I hope it resonates with many and changes the way we see doing taxes and laundry.