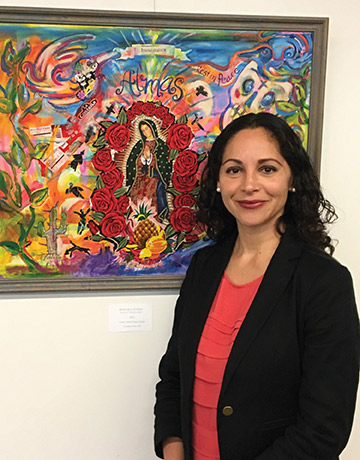 Assistant Professor of English Georgina Guzman received the 2018 California Association of Teachers of English (CATE) award for college classroom excellence on March 9. The award was presented to Professor Guzman at the 60th Annual Statewide Convention in San Diego hosted by CATE.

“My secret to classroom excellence is encouraging students to be self-reflective, to think about their privilege and how they can use that privilege to help make the world a better place—help those that are less privileged,” Professor Guzman said. “Also, being vulnerable in the classroom—I tend to share a lot of personal stories in terms of being a first-generation Latina student.”

“I really enjoy working with the student population here because we have a really diverse student body.”

Professor Guzman was nominated by Jennifer Silver, the President of Southland Council of Teachers of English, for what she has done to demonstrate classroom excellence in the language arts and demonstrating outstanding classroom expertise in teaching some aspect of English.

“Often times conversations can be challenging, but they are very productive and they make us more informed global citizens,” Professor Guzman said. “It’s vital that we have first generation faculty work with first generation students to understand how difficult it is to navigate through a university.”

Raised by parents who emigrated from Jalisco, Mexico, Professor Guzman has been raising the bar in the classroom for years. “I think that my ability to draw from my personal experience makes students feel more at ease and be able to feel more capable in their ability to navigate the University,” she said.

According to csuci.edu, Professor Guzman co-edited “Making a Killing: Femicide, Free Trade, and La Frontera,” a critical anthology which examines gender violence in Ciudad Juarez, Mexico. Her article, “Healing the Affective Anemia of the University: Middle-Class Latina/os, Brown Affect, and the Valorization of Latina Domestic Workers in Pat Mora’s Nepantla Poetry,” is also being published in the upcoming issue of the journal Latino Studies.

“I really enjoy working with the student population here because we have a really diverse student body—we have students from the wealthiest cities like Thousand Oaks and Newbury Park and we also have students whose parents are farm workers from Oxnard,” Professor Guzman said. “We have racial diversity and class diversity here at the University. You have a kind of cross section in the classroom where people have diverse perspectives and they get to learn from one another.”