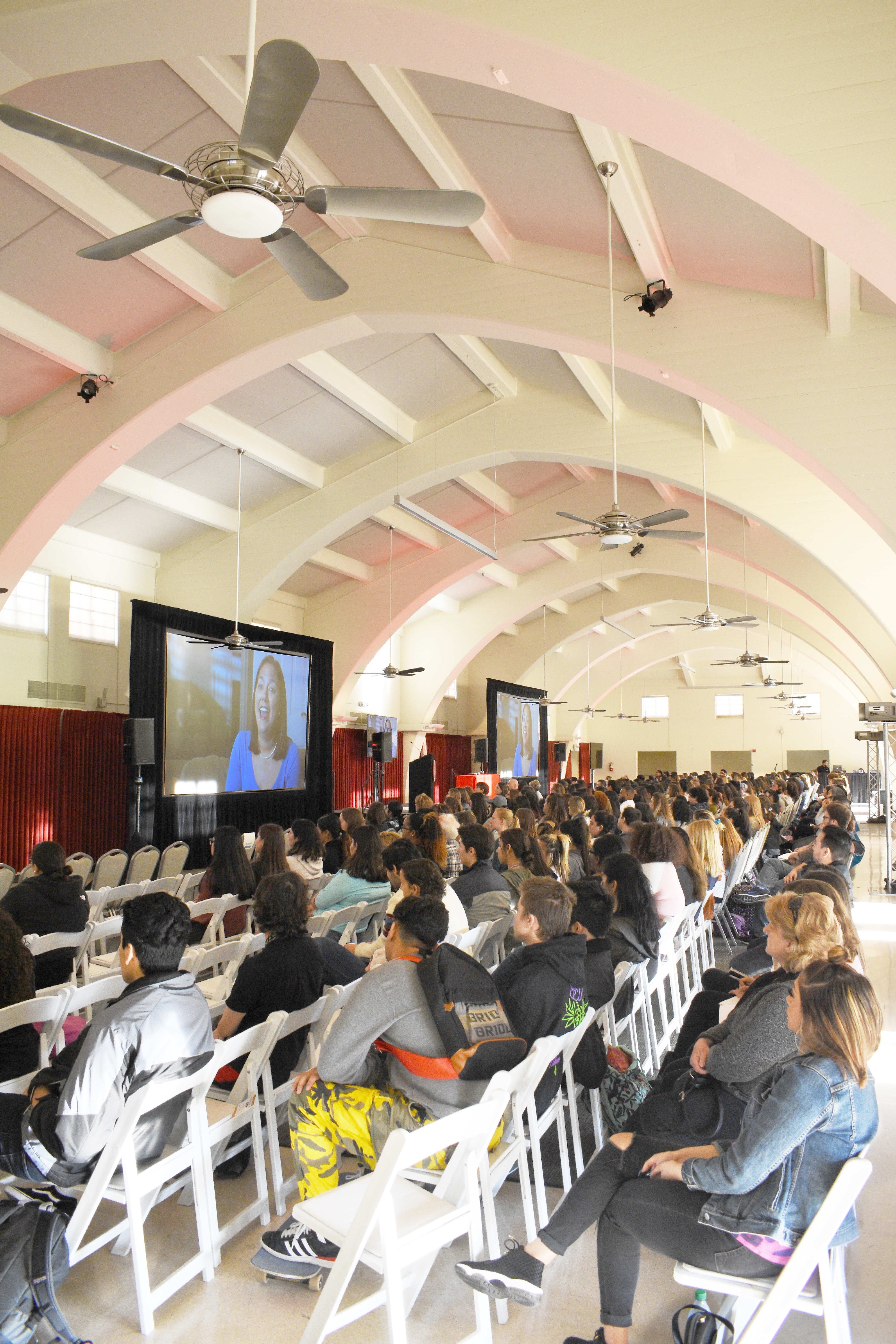 If you have not already heard the exciting news, here it is! CI welcomed a handful of influential individuals from the Freedom Writers Foundation on March 13 to showcase their new Public-Broadcasting Service (PBS) documentary to students, faculty, staff and other members of the community. Among these were its founder Erin Gruwell, sporting her classic pearls and a warm smile as she embraced each person she met and everything CI stands for. The CI View was able to interview her about her philosophy, effective teaching and the importance of the student voice.

“We had this idea that we would share our story, and to be here is a dream,” said Gruwell. “To go from concept to reality is just incredible. We’re just really humbled and honored.” The PBS Freedom Writers Documentary was created to depict their story in a more real way.

Their story began in 1994 when an inspired young woman entered the world of teaching despite her previous aspirations of becoming a lawyer. “I believe that public schools are the bastion of civil rights,” said Gruwell. “I went to public schools, I teach at public schools. I thought that in a classroom it’s more organic and more proactive than in a courtroom, where it’s often reactionary.”

And so a woman in her 20’s went into her first teaching job at Woodrow Wilson High School in Long Beach, California, where she was told that her 150 students were unteachable. “I heard a lot of things that were racist and made me uncomfortable,” said Gruwell. “I was new and I didn’t know how to confront them. I didn’t have power. I didn’t have tenure.”

Gruwell chose to ignore these labels and to get to know her students in her own way. She also learned to use her voice, whether great or small. “When you hear something, say something. And so I’m much more observant now. I would encourage teachers to be so as well, to listen, to have courageous conversations, not to stand idly by.”

She found ways to reach her students, most notably through The Diary of Anne Frank. She helped them to understand that, despite Frank’s tragic end, she used her voice to speak out against evil and to choose love. They explored this history and its victim’s lives as a class. “We learned from a Holocaust survivor that evil prevails when good people do nothing,” said Gruwell. “And they challenged us that you don’t have the luxury of standing idly by anymore.”

One of the original Freedom Writers that visited with Gruwell, Narada Comans, also recounted his time in her classroom. “We went to Bosnia and there was a little girl who mimicked Anne Frank, Zlata Filipovic,” said Comans. “We met her, and she was telling us her stories first-hand, and we were collecting all these experiences for ourselves as teenagers, and this girl was our teacher.”

This experience had been a pivotal turning point for Comans and many of the other Freedom Writers. “The beauty of it was [realizing] we have to do something,” said Comans. “We can look at these experiences and think that they’re just a field trip and then go on about our lives, but we didn’t. We looked back at this, like, ‘Okay, well, we’re teenagers, but we have to do something. We have a voice and we need to be heard’.”

Many of us may go on to become teachers or professors, and we can look to individuals like Gruwell who seem to have transformed teaching from a mere job into a passion. She had many valuable things to say about the responsibility that is teaching. “It’s big and bold, and it’s all-consuming,” said Gruwell. “I hope it’s a calling. I hope it becomes your passion. I hope that you can be flexible and be in-the-moment, and teach with your kids not at them. I think that you have to be able to really know your environment. Know your students, know their stories.”

Comans remembered transparency being one of Gruwell’s best traits as a teacher. “We had problems, she had problems she would share,” said Comans. “We got to that point to where we would do that. We ended up caring about her just as much as we care about ourselves.”

Other than being genuine with her students, Gruwell practiced student-centered teaching and encourages teachers to do the same. “Be socratic and let them take over,” said Gruwell. “I think that’s the best part of everything that’s Freedom Writers, is that I throw them a softball and they knock it out of the park. But it’s them hitting the ball, not me. So I think that as a teacher if you can create that kind of an environment where you have the duality of teaching and being a student, that would make all the difference.”

“She was the best coach,” said Comans. “What I mean by that is like any coach that coaches any team, the team brings on the coach and they expect that coach to change the culture of the team so that they can start winning. What Ms. Gruwell did was she came in, she changed our playbook and we bought into the playbook. And once that happened we were able to be our better selves.”

With Gruwell and a handful Freedom Writers taking their classroom philosophy to each of the fifty states and beyond through the Freedom Writers Foundation, you might be left wondering how did ordinary people living ordinary lives become so extraordinary?

“We have seen the worst of humanity when they’re silent,” said Gruwell. “We’ve been to Auschwitz. We’ve been to camps where they just asphyxiated people with gas and then threw them into the forests. So we’ve seen the worst of humanity,” said Gruwell. “We’ve been to Bosnia Herzegovina that also had a genocide. We have Rwandans in our family who have experience with genocide. So we know what happens when people are silent, when people aren’t accountable, when people just allow it to continue. There’s a sense of urgency. We’re not going to just wait for someone to come in and fix the world. We want to fix it in real time.”

As Comans said about his experiences traveling and learning about social unrest as teenager, you have a responsibility to speak out when you witness injustice. “The greatest thing about that is the baton that we pass on to everybody else will allow them to change their lives… Nothing’s greater than to hear a kid come up to you and say, ‘Thank you for writing this story’.”

The Freedom Writers have traveled, building relationships with many different peoples overseas. “So we, Narada and myself and other Freedom Writers have traveled globally we were just in the Middle East,” said Gruwell. “So it was tragic for us. We now have these wonderful Muslim brothers and sisters we met in the West Bank and Palestinian territories. Shortly thereafter, they had the travel ban.”

This was not the only time the Freedom Writers have witnessed how differences can create borders between people. “We went to communities that had a wall,” said Gruwell. “You know, Israel and Palestine are divided because of a wall so we are now in a country that’s trying to build a wall, and we came back very resolute that we want to build bridges and not walls.”

What do we do when we feel we are at a loss? When we feel that history is repeating itself? “You have to embrace history and teach history, and I think that’s the most important thing. If we don’t learn from history, we’re doomed to repeat it,” said Gruwell. Contemplating the past is not the same as living in it. It is realizing that we do not have to be like our ancestors, but we can rise above them and celebrate the differences. We are all people, after all, and that’s the only similarity that truly counts.


How can we speak out against injustice? How can we college students use our voices to better our communities? “We found that using your voice isn’t always just speaking,” Gruwell said. “It can be standing. It could be writing, we wrote a book. We used our voice, now we have a podcast. There are so many different ways. It could be through social media. I think it’s really important for young people to embrace social media, because it’s instantaneous, and it can be viral. And it’s a way for people to see things.”

Social media can oftentimes get a bad rap for consuming free time, but if you have something to say or to show, there is no better avenue. Because millions invest their time into social media, you can potentially reach the millions. “The three letters you used to use all the time was www. So that means ‘world-wide web’, so that means the world is watching what you put on the web,” said Comans

But Comans had a suggestion about how to utilize social media as a platform. “When you’re sharing, you know, make sure that you have a purpose and that it matters. You can get up there and post cat videos all day long. There’s millions of places for that. But if you’re really up there to have a statement and to have your voice heard, it’s definitely the best place for that.”

It is also important for one to be true to their philosophy. “Practice those things in your life,” said Comans. “Even when you want to wholeheartedly commit to your cause and what you’re saying, how you live your life and how people see you and how you represent yourself is also important as well.”

Whenever you stop to wonder, as we all do, where the truly good heroes of today are, remember Erin Gruwell and the Freedom Writers who all took so little and gave so much to small people with big dreams. Remember that you have a voice, even if it might seem like an insignificant one. And live out your philosophy, for as much good people think they do by preaching, they can change the world with their actions.