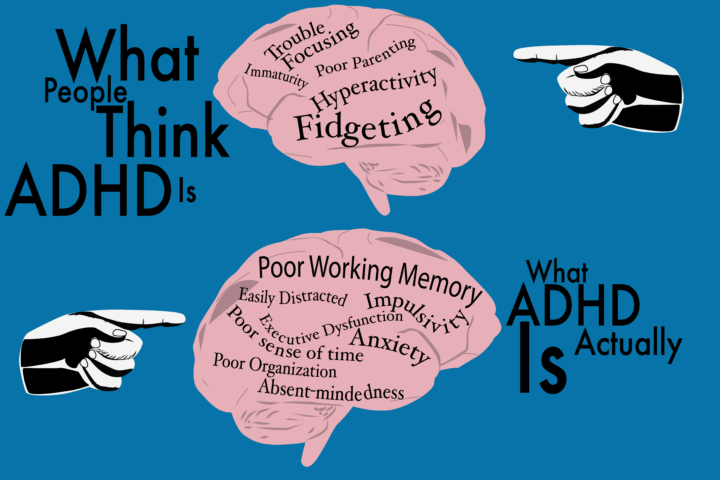 Imagine you have dozens of different TV channels racing through your mind, all demanding your attention, yet you have no access to the remote. Your brain might become fixated on one channel, then suddenly become sucked into another. Sometimes you are so glued to one thing that you are unable to break free and do what you needto do. This is what it can feel like to live with Attention Deficit Hyperactive Disorder (ADHD). ADHD is something that has affected my life for as long as I can remember, and it comes with many stigmas.

Growing up a hyperactive child, I remember hearing comments suggesting that I was immature or did not know how to pay attention. My peers viewed me as a problem child. However, ADHD is not something that a child, or even an adult, has control of. ADHD has to do with what goes on in the brain.

According to the Attention Deficit Disorder Association (ADDA), ADHD “has to do with the regulation of a particular set of brain functions and related behaviors.” In the context of ADHD, this is known as executive dysfunction. It can affect areas such as attention span, memory, hyperactivity, impulsiveness and organization.

Sometimes people are diagnosed as early as elementary school or even preschool.  I was given the diagnosis in third grade after my parents noticed hyperactive behavior and a struggle to concentrate in class. I could barely pay attention, let alone understand the material. After my diagnosis, everything became clearer: my struggle to pay attention, my hyperactivity, all of it.

Stigmas regarding ADHD arise when people think that those with ADHD are unmotivated or immature, or when they claim that everyone has a little bit of ADHD. However, these claims are far from the truth. ADHD is notsomething everyone has or understands. People can experience symptoms of the disorder such as disorganization, poor memory or restlessness, but this does not necessarily mean that they have ADHD.

To say that everyone has some type of ADHD or that people with ADHD are just not trying hard enough dismisses the trials and pain many people with ADHD go through. It brushes aside the complex feelings and hardships that come with trying to understand why one’s brain behaves differently.

In middle school, I was part of a small group my school put together to help kids with attention disorders. We were given extra time and help to understand and pay attention during exams. Other students would make fun of us and question why we got extra time when they did not. What is not understood is that extra time can go a long way for someone who struggles to finish a test under strict time constraints.

According to an article from LA Concierge Psychologist, working memory is what allows us to easily recall, reflect and respond to a memory or event in a short window of time. It is the brain’s way of easily understanding a problem, while also retaining information about that problem.

People with ADHD sometimes have poor working memory, which is a part of executive dysfunction. In that case, the brain can struggle to remember short-term information. Imagine trying to recall a conversation you had with someone justa few minutes ago, but you can only remember some small portions of what was said. That is what I have struggled with my whole life when it comes to ADHD. My brain constantly feels as if it is on overdrive, trying to capture and process the world around me, all while I have my attention in multiple locations.

After my diagnosis, I learned that my brain cannot remember everything, so I would write things down in a journal, on a sticky note or even now on the Notes app on my iPhone. With ADHD can come struggles with memory, though this is not to say all people with ADHD experience this symptom.

I would not be where I am today if I had not been diagnosed and taken the time to understand whymy brain was how it was. Even now, entering my fifth year in college, I stillfind myself learning new things about ADHD that I did not know. I have learned how ADHD can work within the kind of life I want to live. You cannot cure ADHD, but you can learn to understand it. Understanding ADHD comes from realizing and accepting that there is nothing wrong with individuals who have ADHD. They are not defined or represented by the stigmas often associated with ADHD. Rather, their brain is simply thinking differently about the world around them.

Everyone’s personal experience with ADHD can be different, and the narrative expressed in this article may not represent the experience of ADHD for everyone. Consult your doctor if you believe that you may be affected by ADHD or another disorder. If you would like to learn more about ADHD, see the following resources: