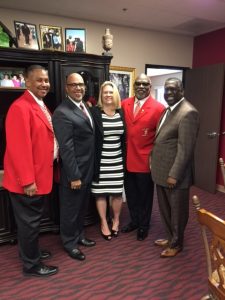 BY KYLE LAKIN kyle.lakin554@myci.csuci.edu Less than 12 college campuses in the nation offer a mechatronics degree and CI is now counted among them. Mechatronics is a four-year program that is only available to incoming freshman. The program accepted 24 students for this fall and will be increasing that number by 24 each year until the […]

CI Cheer plans for the future

by Jorge Garcia CI can always count on a cheerleading team that can cheer on students during sports and social events on campus. Suzanne Mirabelli, a liberal studies major, is the former president of the CI Cheer club and was president for four consecutive years. Alexandria Calderon, a psychology major, has recently been elected as […]

“Hate is not a Laramie value”

by Gissele Mora Every year the CI Theater Program puts on a production. This year’s production, “The Laramie Project”, is a hard-hitting nonfictional story that takes place in 1998, where an incident happened that collided two worlds. The play is based on real-life interviews surrounding the murder of Matthew Shepherd. According to the play’s manuscript, […]