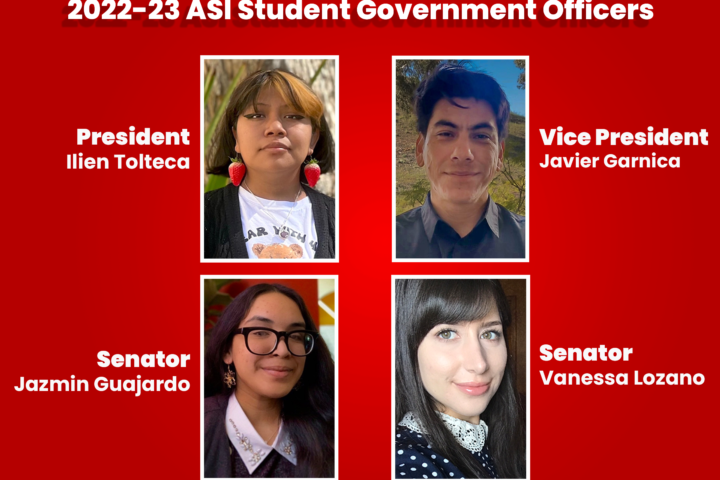 The ASI Elections held April 12 to April 13 determined the leadership of ASI Student Government for the 2022-23 school year. Over 400 students exercised their right to vote, either online or at the Channel Your Vote event on campus, to choose their next student representatives.

Third year Chicana/o studies and studio art double major Ilien Tolteca and fifth year Chicana/o studies major Javier Garnica won the presidential race, garnering 68% of the student votes received. Vice President-elect Garnica said, “I am very happy about the election results. It has not hit me yet that we won but I am very proud of our team.” President-elect Tolteca also shared: “We are looking forward to the work our administration will be doing to bring connections, unity and empowerment to our Dolphins and campus.”

Second-year nursing major Jazmin Guajardo and junior health science major Vanessa Lozano ran for two of the nine available senate seats. Both candidates earned 261 votes, making up 64% of the submitted ballots and surpassing the 10% of received votes required to be elected to a senate seat.

Guajardo told The CI View, “As a candidate I’m very grateful to have been elected for the second time in a row, and I can’t wait to make change like never before!” Lozano shared a similar sentiment, saying, “I’m optimistic about future improvements to be made at CI for its students.”