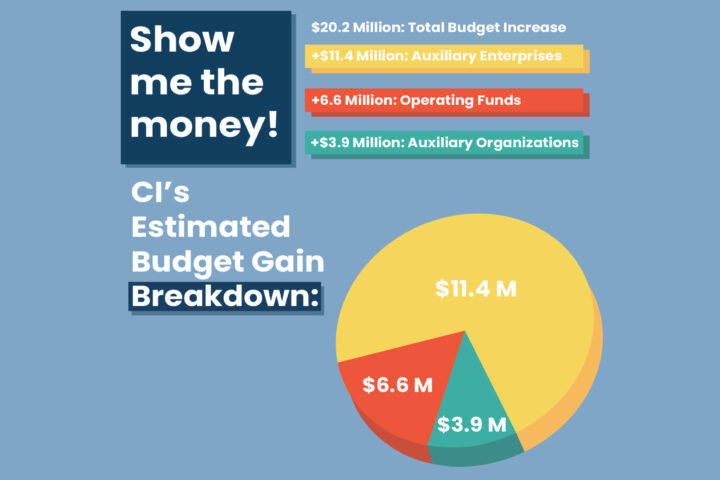 Interim President Richard Yao released the 2021-22 budget memo outlining CI’s financial plan for the upcoming year and reported being “happy to announce that our return will be bolstered by increased fiscal support.”

Within CI’s budget increase in Operating funds, $703,000 of this total will go toward mandatory expenditures, including health insurance and facilities maintenance. The rest of the total budget increase will be used for discretionary increases, including budget restoration, AB 1640 Ethnic studies and Graduation Initiative (GI) 2025. Within GI 2025, 11% of the total funds will go to basic student needs, while another 11% will be allocated toward student mental health services.

Interim President Yao outlined a collaborative campus planning process. “Campus discussions will commence in the fall to help guide the strategic utilization of these funds based on input from campus stakeholders and through the Strategic Resource Planning Committee.” In his email announcement, Interim President Yao announced his commitment to transparency and engagement with the campus community and announced that additional Town Hall meetings will take place throughout the year for further budget discussion and planning.

In his budget memo, Interim President Yao reported that additional work to be done “includes the alignment and prioritization of new funding with campus priorities,” and that “this will be accomplished through a series of calls for proposals commencing shortly after the start of the academic year.” The proposals mentioned by Interim President Yao include the six operational priorities of GI 2025: Academic Preparation, Enrollment Management, Student Engagement and Wellbeing, Financial Support, Data-Informed Decision Making and Administrative Barriers. A second call of proposals will include plans to improve CI’s diversity, equity and inclusion.

Interim President Yao explained that “we have a unique opportunity in this moment to reimagine post-COVID higher education and student success. Now is the time to chart anew our vision and practices for student centered learning and engagement, innovation, and making learning more accessible for all students.” The success of these goals outlined by Interim President Yao are dependent on the deliberate allocation of this academic year’s budget increases, which will be decided by Yao and the campus community in the coming months.