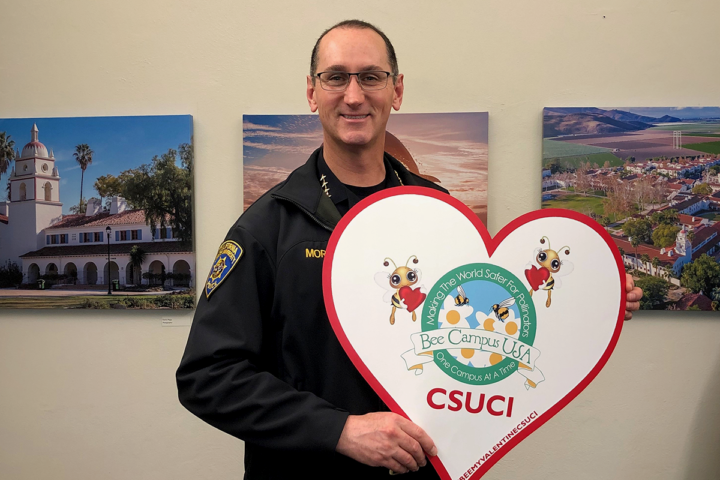 It was announced via a Campus Global email, in early March, that our current Chief of Police, Michael Morris, would be retiring at the end of this semester on June 1, 2021. “This has been a great career and I wouldn’t trade one minute of it,” said Morris in a meeting with The CI View. “I’ve worked in three different departments in three different counties, but without question the 14 years that I’ve spent here at Channel Islands has been by far the highlight of my career.”

Morris started his law enforcement career at 22, when he sponsored himself through the academy. Once he graduated, he took his first law enforcement job in Lemoore, CA. “I was there for a total of just over eight years, and I was promoted to the rank of sergeant,” stated Morris.

However, this was just the beginning of his career. It was after eight years of being in Lemoore, CA that Morris moved. “My wife is a Court Reporter and she worked for a company in Hanford, which was the next town over from Lemoore, and she got a job offer with the court system in Bakersfield and it was one of those job offers that you just can’t refuse,” stated Morris. “She was going to go to Bakersfield, and I was a brand-new sergeant in Lemoore and I didn’t want to give up my stripes, I’ve worked hard for, and I also didn’t want to have a long-distance relationship with my wife and so I started looking for law enforcement jobs in Kern County.”

But little did Morris know that this move was going to change his whole career. “Right at that time, Cal State University Bakersfield was doing a recruitment for a sergeant. They were looking to the outside for a sergeant, and I thought, ‘I don’t know anything about university policing, but I started looking into it,” stated Morris.

“After I started working at Cal State Bakersfield, I also continued working on my undergrad. I had an associate degree before I came there but I immediately started taking classes … I was sitting in the classroom next to students who were younger than me and working on these class projects and engaging in debate and becoming friends with these people who I’m also serving as a police sergeant there,” stated Morris. “It really gave me an interesting perspective on the student perspective in higher education.”

In December 2006, Morris joined the CI community. He was hired on as a lieutenant by the previous Chief of Police, John Reed. He then proceeded to work the next 11 years in that position, until 2017 where he was appointed as acting chief while John Reed helped California State University, Chico. “He left to go be a chief at Chico state on a temporary basis because they needed help up there … he was up with the intention of doing that for a few months and then coming back,” stated Morris. “While he was gone, I was named as the acting chief of police.”

Yet, what was supposed to be temporary turned out to be permanent. After Reed accepted a position that he could not turn down, Morris was named the permanent Chief of Police at CI on Feb. 1, 2018, and Morris held this position ever since.

While at CI, Morris has helped formalize the process for officers becoming EMTs. “I can’t claim sole responsibility for this, but I was a part of it, and it is our officers being EMT’s,” stated Morris. “We respond to more medical calls on this campus than any other single type of call.”

Additionally, he has helped to start the process of achieving accreditation for the CI Police department. Morris explained that achieving accreditation is about professionalism. “It demonstrates to the community that the department is professional as objectively verified by an external independent organization which sets standards for law enforcement based on industry best practices.” Unfortunately, Morris is retiring before this is completed. “I just wish we would have been able to start in a couple of years sooner so that I could see it to its completion.”

And even though he will not be able to see it through, Morris is leaving a lot behind. “I hope I’m leaving behind a department that is solid, that is progressive, structurally sound, employs amazing people and has great policies, procedures and processes in place what we strive for.”

As Morris finishes his time at CI, he leaves this for his fellow officers and for students. “For my fellow officers, you know this is a really tough time to be in law enforcement. It’s tough to be a police officer right now and it can be very discouraging … my advice would be to stay strong and keep coming to work. Don’t get too discouraged; keep doing the right thing because it will be evident that you are doing the right thing.”

“My advice to students is please think critically about what you’re hearing in this narrative. Think critically and do your own research. Don’t be led by the narrative and just blindly follow it. Know that your police cared deeply for you and are doing unique work for you to keep you safe and to make sure that you are able to have a safe environment while you’re here at Channel Islands. We want nothing more than for you to have trust and confidence in us. So please give us a chance to serve you and to try to help shift the tide of this narrative.”

Morris ended the interview with this thought, “There is something very unique and special about this community and it really it’s the people. The people in this community are absolutely wonderful: the faculty, the staff and most definitely the students have been so great to work with and I’m going to miss this place.”