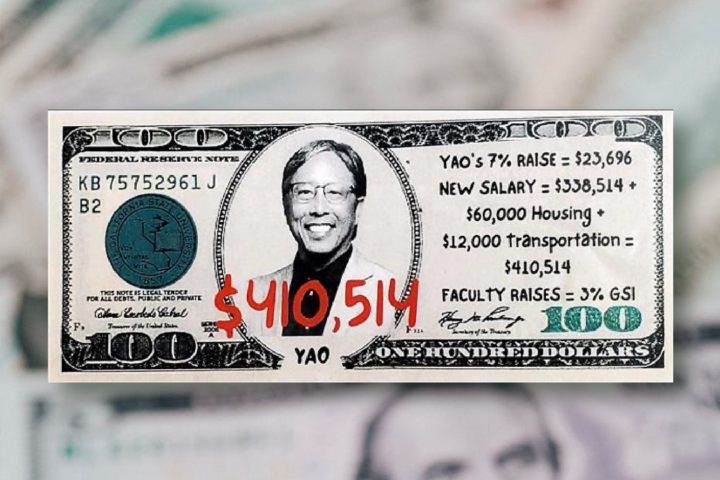 This is a currently unfolding story. Please return to this page as updates are provided.

Strewn across campus, in halls and on bulletin boards, students have noticed interesting-looking flyers around. From afar, they look like a $100 bill, but up close, the image of President Richard Yao becomes clear in place of Benjamin Franklin. Red text sits beside the image of President Yao outlining the salary raise he received in 2022/2023 and comparing it to the pay raise CSU faculty received. Superimposed on President Yao in the same red text is the figure $410,514 – the total compensation he will receive in the 2022/2023 year.

In a poll conducted by The CI View on Sept. 20 on Instagram, 58% of respondents said they had seen the bills around campus, while 42% reported not having seen them.

The bills come from an effort by CI’s chapter of the California Faculty Association (CFA). On its website, CFA describes itself as “a union of 29,000 professors, lecturers, librarians, counselors, and coaches who teach and provide services to the California State University system’s 485,000 (students).”

The CI View spoke to Christina Smith – associate professor of communication and Secretary of CI’s CFA chapter, and Dana Baker – professor of political science and President of CI’s CFA, chapter about the bills.

“It was a collective discussion among CFA members about how to raise awareness around the issue of crazy administrator and presidential salaries,” Smith told The CI View. “We wanted to highlight the difference between the raises that faculty got, and I’m doing raises in air quotes because with the cost of living dramatically going, it’s really actually a pay cut.”

CSU handles bargaining with CFA, including determining faculty raises, through the Labor and Employee Relations Department.

CSU Presidential compensation on the other hand, is handled by the CSU Board of Trustees and Chancellor. President Yao’s raise was part of a larger set of raises given to CSU presidents, ranging from the 7% raise President Yao received to a 29% raise given to multiple presidents across the CSU, comparing salaries from 2021/2022 and 2022/2023 on the CSU website. The CSU attributes this larger-than-normal pay raise to a freeze in pay raises for CSU administration and faculty alike that started during the pandemic as well as to approach pay rates competitive to the market for university administration.

Baker said, “Over-investment in upper administration at the expense of instruction, staff support, facilities, and front-line student services is a growing problem. It is unethical to assign high dollar and high percentage raises to university presidents while refusing to support raises for faculty and staff that keep up with inflation.”

The CI View sat down with President Yao to talk about the bills. On learning about the distribution of the bills, President Yao said, “My take is I never want to ever try to censor or discourage free speech or expression of people’s thoughts and frustrations. So that was my first thought.” He added “Folks are frustrated. They have every right to express their frustration.”

“My second thought was initially I always prefer to talk about things directly, uh, rather than indirectly like this,” President Yao continued. “I meet with the CFA, basically every month with the provost, I meet with the Senate regularly. I also meet with senate exec, so all of the faculty leadership. So I would hope if there were concerns about salary, that we could have those discussions directly in those, those formal spaces that are designed for that direct communication.”

While the goal of the bill was to raise awareness in the disparity between pay raises, some students formed their own ideas of what the bills could mean. Alexandra Avila, senior biology and chemistry double major, commented, “It’s a little confusing.” She thinks “it’s trying to portray our school is lacking in a lot of things and our president is getting paid a lot of money and it makes you wonder what for exactly.” The target of the message, Avila hypothesized, might be “the people that have the ability to stand up for decisions in regard to the school.” She concluded by saying “I think it’s asking for more resources and money to be put into fixing up our school and making it a little more desirable and friendly to other majors.”

Alyssa Galarza, fourth year biology major, said, “I was able to construe the message … honestly, I think it’s very bold.” She explained her interpretation of the bills message: “I think it’s to see the, honestly, credentials, how is he making so much? … we have buildings that can use to obviously be invested in … And also, what about the professors, how much are they getting? Is it equally distributed?”

She added, “(With) our labs, for example microbio, we didn’t have enough material,” and that funding could be put toward “getting more staff or doing more labs, investments in those type of things.” Galarza suggested the message might be directed toward the school as a whole and concurred with Avila on her thought that the bill is asking for an increase in resources and money toward improving the school.

Other students had different ideas. In an Instagram poll, Gerardo Cano, senior computer science major, “was interested to know who put them up and if they’re criticizing the wage disparity between admin/fac(ulty).”

While many students may disagree on the exact message of the bill, it is clear it makes commentary on salary. Students, faculty and staff alike have started having conversations about the bill and what it could mean. Smith said, “When you look at the numbers on that dollar bill, I think it is natural to begin to make comparisons to the cost of tuition, to the costs of housing, to the lack of basic needs that a lot of our students are struggling with.”

Baker also said, “Raising general awareness about the transfer of public resources to the private wealth of university presidents and other upper administrators is key. This takes the form of both outsized salary increases and housing stipends that also become private wealth.”

President Yao also had his own uncertainty about the meaning of the bills. “I’m not quite sure the motive and the desired outcomes of this… What I do know is that, and this was labor relations, and salaries and contracts, those are all negotiated centrally through the Chancellor’s office and the board of trustees.” As of Sept. 27, President Yao had not heard a follow-up about the bill “I don’t know who originated the bill, so I’ve not been contacted directly,” he said.

Smith told The CI View that they would like President Yao to “support his faculty, advocate on behalf of the faculty that serve his students to get them fair living wages, to get them raises that are not comparable with administrators, because that would be amazing, but at least keep up with inflation.”

Going forward, Smith invites students to “share that information with others that may not know and go and find how that information is spread across campuses, right, so that they can kind of see just how rampant the, the bloated salaries and benefits are.”

“We have a saying we like to give often, and it is that faculty working conditions are student learning conditions. Those things are absolutely related, and they’re pretty hard to disentangle,” Smith said.

Students for Quality Education will also be providing more information regarding the bills in their next meeting, Oct. 3, 6 p.m. to 7 p.m. on Zoom. More information can be found on their Instagram @csuci_sqe.

This is a currently unfolding story. Please return to this page as updates are provided.

2 thoughts on “Making “cents” of the Yao bills”