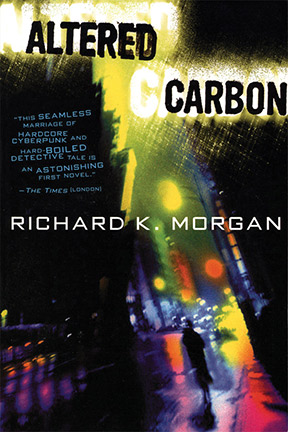 Death is something we all fear. It is something that can drive us to do everything we’ve ever wanted to do in the world, because the reality is once we reach our end, that’s it. However, in the world of Netflix’s newest sci-fi series “Altered Carbon,” death means nothing.

Based off of Richard K. Morgan’s book of the same name, the series introduces us to the futuristic city of San Francisco (referred to as Bay City), where everyone has a small disc-like device called a stack attached to the back of their neck. If you die, your body is sprung back into another body called a sleeve. It’s with this technology that we are introduced to our protagonist, a man named Takeshi Kovacs. After his stack was terminated in a previous life, the former soldier is awoken from a 250 year-long slumber to the land of the living by the wealthiest man in the world, Laurens Bancroft.

“Altered Carbon” is only on its first season, and if it keeps it up with its complex world and characters, it’s sure to generate a lot of interest and excitement.

However, Takeshi is a criminal of war and is faced with a life in prison. Bancroft, on the other hand, offers Takeshi the chance of a new life. That is, if he can do one thing: solve his murder. From here, the plot starts to get complex. I found myself drawn deeper into the story, following Takeshi every step of the way, with each episode bringing up new stories and twists. On the surface, Takeshi is like the hard-boiled detective of the ’60s: cold, tough, reclusive. But he’s much more than that. Despite shedding his old sleeves, he carries with him the pain of his troubled past. He’s a man striving for some purpose, in a world where the idea of “life’s purpose” sounds more like a joke than advice.

In fact, “Altered Carbon” plays more with this theme through the eyes of other characters, as Takeshi is joined by Bay City cop Kristin Ortega, Artificial Intelligence Poe and a father named Vernon Elliot on his mission. While our focus is mostly on Takeshi, the show allows us to get a better idea of a larger world at work. It allows us to understand not only their thoughts and emotions, but their view on this chaotic world and how it affects them. In the end, it’s not just about Takeshi. It’s a story about each individual and what their purpose is.

Along with its dark, dystopian setting, “Altered Carbon” plays heavily with nudity and violence throughout the show, depicting scenes that may be viewed as graphic. It’s these graphic depictions that, according to executive producer and creator Laeta Kalogridis, play a key role in how the idea of body swapping is depicted in the world of “Altered Carbon.” Just like we throw away resources we deem useless or insignificant, our bodies have potentially become another one of these useless resources. Like tossing an old phone or laptop, you could just “upgrade” to a brand new body, and once you’re done with that one, the cycle continues.

However, this is where it really gets interesting. You can’t just get any body you want. In the world of “Altered Carbon,” the rich, called Meths, are able to get any sleeve they desire: young, beautiful, sexy. Whereas the poor get whatever they can get, whether it’s an old body, a male or female body, or a twelve-year-old boy’s body, your stack gets uploaded into whatever is available. It’s this notion that also plays into the question of identity. Your gender, age or let alone ethnicity no longer identify you as you. As far as the world is concerned, you’re a human like the rest of them: a flesh and blood shell that you can put on and shed at will.

Overall, “Altered Carbon” offers a world that’s far from the typical dystopian story with a message of warning and terror. Sure the message is there, but it’s the characters and their actions that are what make the story so compelling. Besides being based off of a book series, there’s no need to read it ahead of watching this. “Altered Carbon” is only on its first season, and if it keeps it up with its complex world and characters, it’s sure to generate a lot of interest and excitement—no matter what sleeve you are.