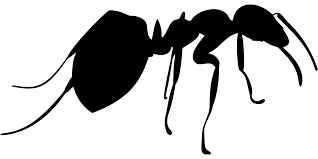 As a new transfer student living in the dorms here at CI, I was unclear of what to expect. My move in process was mostly seamless as was settling in. One thing I wasn’t expecting were the little black critters that decided to make themselves at home. At first, it was one or two on the window sill, or one every now and then on the bathroom sink-no big deal. I quickly realized there were so many more. I made the mistake of leaving an empty food container in my waste basket overnight. The next morning, I woke to an entire army invading my room. I quickly jumped up, grabbed some of my roommate’s bug spray and won the battle.

When ants find a source of food, they secrete a pheromone that allows other ants to follow their trail and find it as well. Knowing this, after I cleaned up the bodies, I put some white wine vinegar in a bottle and sprayed their path. Since that day, I haven’t seen any ants in my room although I am still careful about leaving anything too enticing for them to eat.

Although bug spray is an effective way to solve the problem instantly, a few other more humane ways exist to repel ants as well.

“[My mother] would use essential oils to keep the ants away;’ said Madeline Boyd, a resident of Anacapa Village.”She would mix water with drops of peppermint and tea tree oil to keep them away.”

A quick Google search revealed that if you are using this sort of mixture on any surface that touches food, you should replace the tea tree oil with lemon oil because tea tree oil is toxic when consumed.

Ants might be inevitable, especially during the summer months, but there are ways to combat them on a small scale. A mixture of warm soapy water can be used to wipe away the ants and their scent trail. Also, a few things can be used to mask the pheromones, so no more ants will be able to use them. Sprinkling cinnamon along an old trail has been known to be affective. Vinegar is a tested method that has shown results and laying drier sheets along the old trail also masks the smell. If you have any other tips to combat the ants, visit civiewnews.com and share!