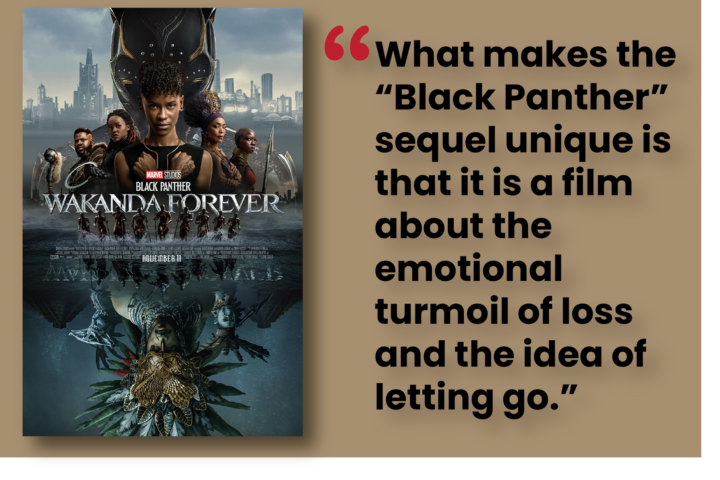 Have you ever grieved over the loss of a loved one? We all have or will at one point or another in our lives. “Black Panther: Wakanda Forever” opens with loss and grief, as the death and funeral for King T’Challa, aka Black Panther, proceeds in the opening act. This death mirrors the real life passing of acclaimed actor Chadwick Boseman, who died in 2020 from colon cancer before the draft for the “Black Panther” sequel was written. With Boseman’s real life passing, the film “Black Panther: Wakanda Forever” is shown as a tribute to Boseman, his life and his career.

“Black Panther: Wakanda Forever” has a PG-13 rating and a runtime of 2 hours and 41 minutes. Produced by Marvel Studios and distributed by Walt Disney Studios Motion Pictures, this is the 30th film in the Marvel Cinematic Universe (MCU) and is the sequel to the 2018 film “Black Panther.” It is also the final film of Phase Four of the MCU, also known as the beginning phase of the Multiverse Saga.

Ryan Coogler returns as director and writer for the “Black Panther” sequel. Having directed and co-written the original film with returning writer Joe Robert Cole. Kevin Feige returns as producer for this film with his co-producer, Nate Moore.

Returning to the screen from previous Marvel titles such as “Black Panther,” “Avengers: Infinity War” and “Avengers: Endgame” is Letitia Wright as Princess Shuri, Lupita Nyong’o as Nakia, Danai Gurira as Okoye, Winston Duke as M’Baku and Angela Bassett as Queen Ramonda.

The “Black Panther” sequel also introduces us to new characters that make a big impact to not just this film, but the MCU as a whole. These include Tenoch Huerta Mejía as Namor, king of Talokan. Huerta is a famous Mexican actor who has made many appearances in films from both Latin America and Spain. He has also appeared in American projects such as “The Forever Purge” and “Narcos: Mexico.” Actress Dominique Thorne makes her MCU debut as Riri Williams aka Ironheart. Thorne has appeared in such movies as “If Beale Street Could Talk” and “Judas and the Black Messiah.” The actress is set to reprise her role as Riri Williams in the upcoming Disney+ show “Ironheart”, which will premiere in late 2023.

At the end of the first “Black Panther” film, King T’Challa exposed the world to the secretly technologically advanced nation of Wakanda, thereby opening up Wakanda’s borders to everyone. His plan was to help the world using Wakanda’s vast resources. After the events of “Avengers: Infinity War” and “Avengers: Endgame,” the world changed dramatically – and with change comes new threats.

The world’s governments are now searching for vibranium, an advanced metal resource used widely in Wakanda. The nation now finds itself under threat of attack. They are perceived as weakened after the death of their king and protector. What the world and Wakanda do not know is that there is another source of vibranium, deep within the ocean in the ancient city of Talokan. This city of aquatic people is ruled by their king and god Namor. He comes to Wakanda with a proposition to join him against the surface world that intends to ransack both their cities for their resources. Will the people of Wakanda side with Namor against a world ready to rip them apart or will they refuse his offer and suffer Namor’s wrath?

Many people believe that the superhero genre is oversaturated. Every couple of weeks there is a new comic book movie or show or video game. It is true that the superhero genre is more popular than ever, mostly because of the Marvel Cinematic Universe. “Black Panther: Wakanda Forever” might be another film in the long line of superhero movies, but do not let that hold you back from seeing it. This movie does employ many of the superhero genre plot points. The heroes, the villains, the world saving motives and, of course, the important battle of good versus evil. But what makes the “Black Panther” sequel unique is that it is a film about the emotional turmoil of loss and the idea of letting go.

The acting in this film is superb, especially from Wright, Basset and Huerta. The development of Wright’s character Shuri from comic-relief-side-character to main player in this film is astonishing. Basset’s role as a queen defending her country while simultaneously mourning the loss of her son is powerful and among other things Oscar-worthy. Huerta on the other hand had a lot to pull off in his role as Namor. Being new to the MCU, he had to cast a wide enough shadow to help himself stick out, not just from the other more well-known characters, but also to show his strength as an antagonist.

Being an antagonist in a Marvel film means you will be compared to all the other antagonists before you. Namor had to be on the same level as Loki, Thanos and especially Killmonger, the antagonist of the first “Black Panther” film. Huerta knocked it out of the park with his take on Namor: an antagonist that you can hate but also care for, giving him just the right amount of backstory to understand where he is coming from as a character. He is also given a motivation that you can fully understand. The motivation of saving his people makes the audience see him as not just a simple villain, but as a multidimensional character who believes he is in the right.

The cinematography was another positive experience of the movie. You as the audience are taken back to Wakanda. As in the first film, you see this fictional country as a technological marvel, but also brimming with different cultures, each represented in set design, costume design and character design. The feeling you get while in Wakanda is a mixture of something old and spiritual with something new and advanced.

We are also introduced to the world of Talokan. An ancient civilization that resides under the sea. Never seen or touched by the outside world. An ancient civilization filled with culture that inspired by multiple Mesoamerican cultures. You see only bits and pieces of this magical kingdom, but it is just enough to understand the people and bait you into wanting to see more. The underwater scenes are dream-like. The water almost becomes a character in itself. From the serene pools of undisturbed lakes within Wakanda to the violence of crashing ocean waves as the people of Talokan attack. The water can be seen as emotional as the film characters themselves. We cannot talk about “Wakanda Forever” without mentioning the first “Black Panther” film.

Going into this sequel, you cannot help but think about Chadwick Boseman and his great performance as T’Challa in the first film. That, and the storyline and impressive villain Killmonger, played by Michael B. Jordan. “Black Panther” was a great film overall and for the sequel to try to live up to that legacy is a hard burden to carry. In my opinion, the movie does a great job on its own. From the realistic characters to the great use of music and the intense action sequences. If you truly want to enjoy this film, experience it as its own thing and do not try to compare it with what the original “Black Panther” did. All and all, I give this movie 4½ dolphins out of 5.