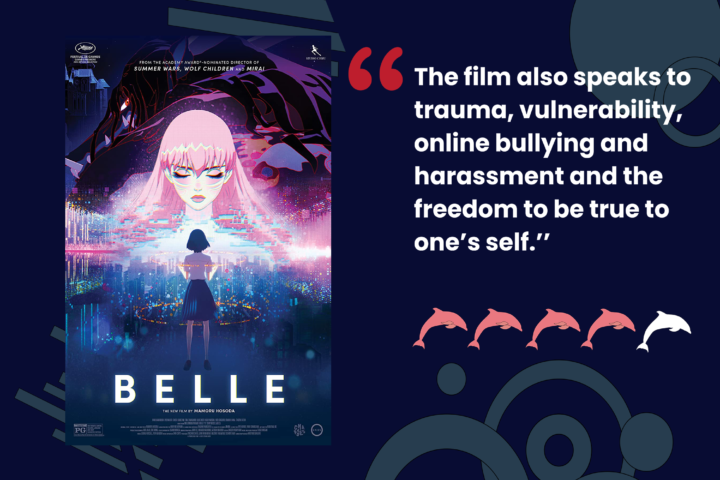 Like the classic tale from which it takes inspiration, the 2021 film “Belle” is also about a girl who bravely tries to save a beast. It is a reimagination of the classic tale. Similar to Disney’s musical version of “Beauty and the Beast,” songs play an essential role in “Belle.” While the familiar version is about a well-known love story, this one is about more than just love.

The film begins with a girl named Suzu, a high school student in a rural area of Japan. Due to her mother’s passing, she has trauma and difficulty expressing herself. Her mother used to teach her music, but since her mother passed away, Suzu has a hard time finding her voice. One day, her best friend Hiro invites her into a virtual reality metaverse called “U.” More than five billion people around the world use U, in which they live as AS’s.

AS’s (pronounced as “ei-es”) are an avatar of each person made automatically based on personal biometric information. For example, Suzu has freckles on her cheeks, so her AS, Belle, also has dots that look like her freckles. AS’s features are connected to each person’s characteristics, both physically and mentally.  Suzu is captivated by her introduction to U, where she is told, “You may not be able to start over in the real world, but you can start over in the world of U.” Eventually this environment inspires Suzu so much that she starts singing again. Her songs soon become a big hit, and her avatar Belle also becomes popular within U.

One day, at her concert, a mysterious AS called Beast, with many scars on his back, suddenly shows up and ruins the performance. Suzu sees the Beast running away from other AS’s and takes pity on the fear and emotional damage he displays. Belle tries to get closer to Beast, but other AS’s also search for him. Beast is hated by many AS’s because he has been winning on the battlefield section in U with an infamous aggressive battle style. As Suzu starts to learn more about Beast, she wants to save him from his struggles because she realizes that he is facing similar challenges to her own, like having a hard time opening up her heart and expressing her true self. She begins to feel affectionate towards Beast and is inspired to sing for him, just as her mother showed her love with her music.

What I enjoyed about this movie was the detailed animation, beautiful songs and messages that the story tries to share. The Japanese director Mamoru Hosoda is an Oscar-nominated director and his production and animation technology are outstanding. Within the first three minutes of the movie, you will be drawn into the world of U.

Along with the visual appeal, Belle’s songs make the movie special. I have watched it twice; the first time was in Japanese and the second time in English, and I cried at the same scenes and songs both times. The song “A Million Miles Away” truly touched my heart. The song is about Suzu missing her mother but also getting her old self back again with the joy of singing that her mother taught her. Also, the melody is a bit similar to the song “Beauty and the Beast,” which seems to be an Easter egg.

As I mentioned above, this new version of “Beauty and the Beast” is not just about love. The film also speaks to trauma, vulnerability, online bullying and harassment and the freedom to be true to one’s self. Because there are so many themes in the movie, the plot might be a bit confusing at first. I would still give this movie 4 out of 5 dolphins. I highly recommend you watch it either in a cinema or on a big screen so that you can experience the world of U deeply.