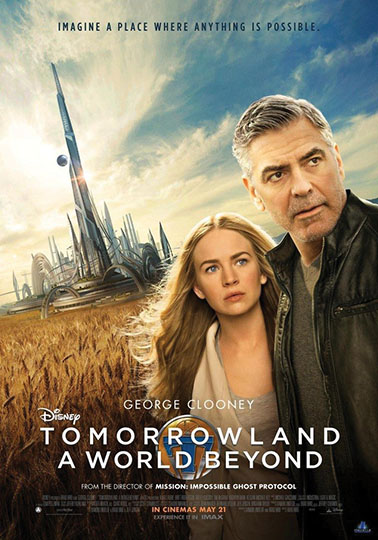 “A vista into a world of wondrous ideas, signifying man’s achievements … a step into the future, with predictions of constructive things to come. Tomorrow offers new frontiers in science, adventure and ideals: the Atomic Age, the challenge of outer space and the hope for a peaceful, unified world.”

This is the dedication Walt Disney gave on July 17, 1955, when a new land opened in the Disneyland Park.

It would not only bring families to a faraway world and explore new regions, but also witness the technology and achievements mankind can attain.

Despite being an action packed sci-fi film, “Tomorrowland” also portrays the idea that Walt Disney envisioned when he created the Tomorrowland addition to the Disneyland Park.

This new land is called Tomorrowland, and it’s only fitting that many years later Disney would release a sci-fi film by the same name.

The movie, released in 2015, offers a few similarities to the idea behind the land itself, allowing the audience to take away a message we can all relate to.

“Tomorrowland” starts off with a young boy named Frank, who is attending the 1964 New York World’s Fair. While trying to get one of the top inventors to like his prototype jet pack, he meets a young girl named Athena, who proceeds to give him a T-shaped pin.

With this pin, young Frank is whisked to Tomorrowland — a world crafted by artists and dreamers alike where anything is possible. It’s a world that resembles the retro sci-fi of the 80s, yet has the tall glass buildings, trams that hover above the tracks, spaceships and jetpacks. It’s a world of endless wonder. However, this wonder is about to end.

The movie then shifts to present day, where the pin comes into the hands of a teenage girl named Casey Newton, the daughter of a NASA scientist and a believer in a brighter future. Once she finds the pin, she is recruited by Athena, and later meets up with Frank, on a mission to save Tomorrowland. I will spare the fine details on what this mission is, but the movie itself resembles a wonderful tale of creativity and hope.

From the start we are witness to the character Casey, who is surrounded by people that only talk about chaos and destruction in our future. There is a scene when she is in school and her teachers keep talking about all the negative and terrible aspects that are in our future. Casey raises her hand and asks, “How can we fix it?” This scene, and Casey herself, offer an interesting parallel to our world today.

In a world where it can be so easy to look at the negative, Casey’s character reminds others of how she believes things will get better. In another scene, Frank asks her if she wants to know exactly when she dies. To this, she simply replies that she doesn’t want to — that she believes in creating her own destiny. It’s important to note that the overall theme may sound cheesy or cliché, but it’s a theme that can be relevant to today.

Tomorrowland is a world of endless potential, a world that was designed to be away from the political and any negative aspect of reality. Instead, it is fueled by artists, inventors and dreamers whose only limit is their imagination.

However, as we learn further into the movie’s plot, the people of Tomorrowland become greedy with their desire for inventions and create something that they shouldn’t. It’s this aspect of the movie that serves as an interesting plot point: in the process of trying to create a world of hope and a better future, they end up creating something that becomes their downfall.

Despite being an action packed sci-fi film, “Tomorrowland” also portrays the idea that Walt Disney envisioned when he created the Tomorrowland addition to the Disneyland Park. With the cool retro space guns and feel of Atomic Age style sci-fi world, “Tomorrowland” is a great movie filled with not just action, but a message about striving to create a better world and a better tomorrow.