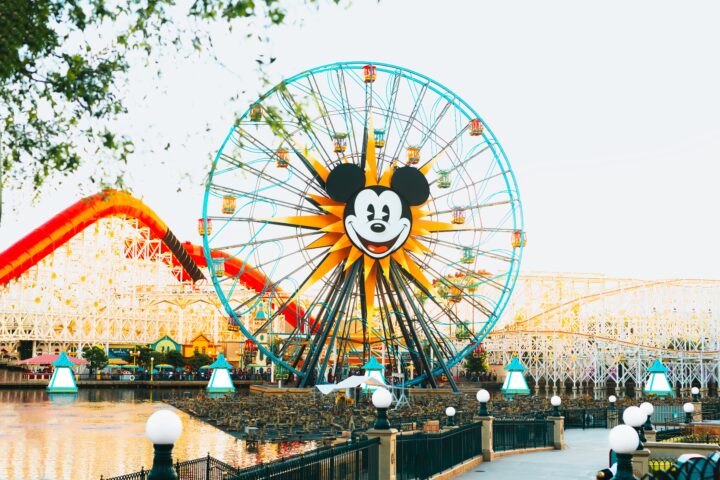 Ah, Disney’s California Adventure. I still remember the early days of the park, when I would race out of Disneyland and towards its sister park. I remember immediately being greeted by an army of blue letters, all spelling out “California” in all its glory. Yet, to many fans like myself, a whole land based on the state you live in may not have been entirely the best idea that the Imagineers could have envisioned. What many guests do not know is that California Adventure has always been a very troubling and confusing park since day one, let alone back when it was first conceived by the CEO at the time, Michael Eisner and his team of Imagineers. From the original ideas and concept for the second park, to the rushed attempts Eisner put his team through, to our current haphazard future, there is a very troubling history of Disneyland’s second park.

Our story begins back around 1984, when Eisner was the CEO of the Walt Disney Company, and Imagineers were just on the heels of making Walt Disney World the best tourist destination, from the Florida EPCOT Center with its World Pavilions to the various rides people can enjoy. Not to mention, as stated by the Walt Disney Archives website, this was also around the time the WED Enterprises saw a huge increase to their parks.

Around the early 1980s, people saw the release of Tokyo Disneyland, along with seeing new additions to Disneyland. Yet, Walt Disney World remained the primary vacation spot, with its expansion of the EPCOT Center and its various new resorts, guests had every intention of staying a day or two at the theme park. However, the same could not be said for ours. At the time, Disneyland was limited to a single park, giving guests merely a day or half a day of fun and excitement.

Sure, they had the Disneyland hotel with various shops and restaurants, but keep in mind that things did not have the same variety as we do today with California Adventure. Now, there are the various rides at Disneyland, and the many experiences one can try at Downtown Disney and the hotels. You would have every reason to stay more than a day or two. I remember doing so!

But as an article from Yesterland put it, Eisner had every intention of making Disneyland a place where “your best time would be spent inside a Disney hotel, at a Disney theme park, eating at Disney restaurants, and buying stuff from a Disney-owned shopping mall.” People needed a reason to visit California, let alone drive down to the parks. This is where our first idea comes into play.

One of their first ideas of this massive expansion was the idea called WESTCOT Center, an area largely inspired by Walt Disney World’s Epcot, hence the name. It would have a massive area that would allow us to celebrate our cultural diversity and everything that makes us human, remarkably like the idea presented at Epcot. As stated by the Yesterland article, like the Cinderella Castle is an icon of Disneyland, so too would a golden sphere serve as the icon of this WESTCOT Center in addition to three to four different themed lands: Wonders of Living, Wonders of Earth, Wonders of Space and Ventureport. We also would have gotten a land based on recreations of various countries around the world, from Asia, Europe to the Americas. So, what happened to this massive undertaking of a project?

Eisner expected a huge influx of money to come from Disneyland Paris, Disney’s latest upcoming park at the time. But that ultimately failed and lost the company a bit of money. It was then that Eisner sought to cut major projects that the Imagineers had in store, such as the cancelled Discovery Bay expansion to Disneyland, an entire land that would be based on Jules Vernes-inspired steampunk imagery of the future.

In addition to a total revamp of Tomorrowland and other big projects, which were all cancelled in the name of saving money and resources for the company, Eisner was truly shifting the company away from the creativity and big glamor that Disney was known for, and more in favor of saving a single penny. It is here that our California Adventure is born.

California Adventure would open on Feb. 8, 2001, showcasing to the world a large Golden Gate Bridge as its entranceway and strange cutouts of mountains on each side. A long blue lettering smacked in the front spelled out “California” to all who came to this park.

It was a land meant to be filled with pop culture, far from the likes of the fantasy and make believe in Disneyland. However, that may have been a mistake. The park would be split into four lands: Sunshine Plaza, Hollywood Backlot, The Golden State and the Paradise Pier. Yet, it all was not as pleasing. As a Theme Park Tourist article notes, Walt Disney specifically avoided creating a park that evoked images of your “dirty boardwalks of the day” as he “was tired of the seaside amusement parks with un-themed thrill rides and off-the-shelf attractions”. Well, enter our big problem.

Disneyland opened with an expansive world of fantasy and science fiction. From traveling across space in Tomorrowland to feeling like you are adventuring down a river with the Jungle Cruise in Adventureland, Disney crafted a park that was truly beyond anything people had imagined!

It was themed and so well created that people were transported to different worlds, able to feel like the characters and heroes of their own legends and tales. California Adventure had none of it.

It was a land that was filled with simple eateries and experiences for guests, crude designs of an airport hangar and a huge depiction of a large pier with a Ferris wheel. I think Theme Park Tourist said it best with, “The magic of Imagineering has always been that Disneyland was built by filmmakers who were able to make guests feel “transported” to long-lost places and times…that never really existed.” Yet that is the thing! Guests can transport back to an ancient, cursed temple, fly across London with Peter Pan or soar through space on Star Tours or even more so in the new Galaxy’s Edge land.

As a Disney fan and fan of stories myself, I find the best enjoyment is when Disney truly makes you feel as if you have stepped straight into one of their stories. How can you make a land based on California, when for many Californians like me, we would rather make the drive to see the real deal than see some crude mockup at a theme park?

Here we are now in 2021, with California Adventure growing and changing before our eyes. As it stands of this writing, California Adventure has seen major overhauls, not just in its exterior with a more modern entranceway and getting rid of the large Golden Gate Bridge, but also in its rides.

Soarin Over California is now Soarin Around the World, and most of Paradise Pier’s fun California atmosphere is now replaced with a little Pixar touch, themed entirely to the Pixar movies.

The land where Tower of Terror and It’s a Bug’s Life were, are now being used for the upcoming Avengers’ Campus expansion, seeing guests being able to work alongside our favorite superheroes such as Ant-Man and the Guardians of the Galaxy. After all, with the major success of the Marvel films, it seems only a matter of time before Disney looked to integrate it into their parks. So, where does that leave us?

California Adventure is far from the original concept of this massive WESTCOT project Eisner had originally envisioned for Disneyland, and who is to say if that would have been better? We would have been able to experience lands based on different countries, all the while experiences the wonders of space travel and beyond, feeling inspired and in awe with what humanity can do amongst the stars. The Wonders of Living may have allowed us to experience ways we can make our planet a better place, probably an emphasis on eco-friendly environments and practices.

Before our eyes we are seeing the ideas of WESTCOT transforming into California Adventure, and soon, into the park we have today: a mix of Pixar and Marvel.

Yet, many fans like myself would still say it is not the same. California Adventure was this idea of a land based on California, and yet, with a land based on Pixar and Marvel, I ask, “What screams “California” about that?”

Perhaps if Disney genuinely wants to change up California Adventure, a complete name change may be in order. A name like Disney Adventures or Disney Pier, something that would make sense of these new changes. After all, Disneyland is visited by so many people from around the U.S. and the world. To continue to have a name like “California Adventure” with a land filled with superheroes and Pixar characters alike may give off the impression that these franchises are strictly based in and for Californians. After all, so many people know Pixar and superheroes, it is a land that many people can enjoy and love. Then again, I am reminded of the age-old advice of Imagineers, something that may speak to this new age of the park—something that I think we should remember every time a new addition falls flat: A good idea never dies.