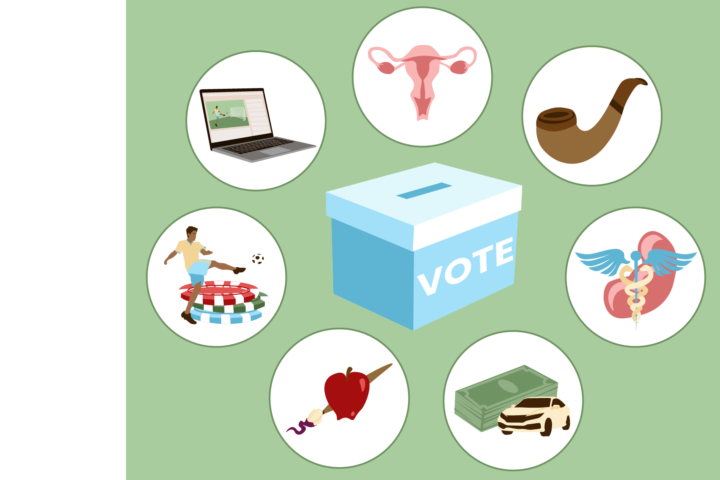 It is once again the end of an even-numbered year, which means election season is in full swing. For those of us that live in California, anyone who is registered to vote should have received a mail-in ballot. It is imperative that you remain well informed on what you vote for, so The CI View designed a basic guide to this year’s propositions.

Proposition 1 covers one of the top political issues facing the county today. It proposes amending the state constitution to “expressly include existing rights to reproductive freedom,” including access to abortion care and contraceptives, according to California’s Legislative Analyst’s Office.

Unlike most propositions, this one does not have a direct fiscal impact, meaning that its passage would not directly cost the state any money. However, there could be some indirect costs in expanding reproductive care considering millions of Californians receive state-sponsored healthcare through CalCare, Medicaid and Medicare.

Because of the Supreme Court’s recent overruling of certain cases, such as Roe v. Wade, reproductive rights have been entirely delegated to the states. In addition to California, Michigan and Vermont both have similar propositions on their midterm ballots this year.

Montana and Kansas will also have votes on propositions restricting reproductive rights. Kentuckians voted down an anti-abortion proposition in August.

The base of the main argument against Proposition 1 is largely faith-based. This can be observed by the majority of faith-based sponsors of its opposition. The other is based on the actual proposition itself. Some argue that the wording of the proposed changes to the California constitution would conflict with other state laws on reproductive care; some claim late-term abortions would be allowed with the proposition’s current wording.

Supporters mainly base their reasoning on protecting human rights. California law already protects some reproductive rights but does not guarantee free choice or access to abortion care. Passing Proposition 1 would expand and protect reproductive rights in addition to these laws.

Proposition 26 is about in-person gambling laws. The proposition aims to allow in-person sports betting and other regulated forms of gambling at racetracks and tribal casinos while adding new ways of enforcing gambling laws.

Much like Proposition 1, the legality of sports betting was left up to the states via a Supreme Court decision. Sports gambling remains a multi-billion dollar industry throughout states that have legalized it.

Several dozen California tribes have endorsed the proposition because they believe it will bring more business to their casinos; over $62 million has been spent by the proponents for the proposition. Opponents, including the California Republican Party, argue that the proposition gives too much power to tribal casinos and increases the risk of gambling addiction for young adults.

Proposition 27 is a companion to Proposition 26, as it also deals with the expansion of gambling in California. Its passage would change the state constitution to allow tribal casinos and other casino companies to provide online gambling via the internet and mobile devices.

This would widely expand gambling revenue, and therefore, tax revenue for the state. The proposition explicitly states that casinos must pay 10 percent of all bets made every month to the state. This money would then go into a state trust fund, 85% of which would be used to address homelessness, and 15% would go to tribes not involved with online gambling.

State revenue is expected to raise no more than $500 million per year should the proposition pass. Some of this would go towards new regulation codes that would aim to regulate the online gambling industry.

It goes without saying that most major casinos, gambling companies like DraftKings, and major league sports companies are behind the proposition. They seek to gain the most from this proposition. Over $170 million has been spent by proponents for the proposition, however, they are outspent by their opponents.

This proposition covers funding for art and music programs. By allocating at least 1% of funds guaranteed to public schools, Proposition 28 would reserve that money for educational programs for arts and music.

This would increase state costs by about $1 billion dollars annually, which accounts for the money being put into these art programs.  The majority of the money would be used to hire new arts staff; the rest would be distributed into K-12 programs mainly based on enrollment, as well as their share of low-income students.

As of Oct. 24, 2022, there have been zero official opposition filed towards Proposition 28.

Supporters who donated towards the proposition include Superintendent of LAUSD Austin Beutner and the California Democratic Party.

According to California Legislative Analyst Office, Proposition 29 would do the following: require clinics to have a physician, nurse or physician assistant on-site during all treatment hours; require clinics to report infection information to the CDPH; require clinics to say who their owners are; charge clinics penalties for not doing so and notably, prohibits clinics from refusing care to a patient based on who pays for them.

The passage of this proposition would raise costs on clinics; the Legislative Analyst’s Office of California expects most clinics to either raise their rates, continue with less profits or close some clinics. Those who are run by the state would see raises in state medical costs.

For some insight into the operation of dialysis, there are roughly 650 dialysis clinics in California who see around 80,000 patients every month.

This proposition is mainly funded by the United Healthcare Workers West branch of the Service Employees International Union, who have proposed and failed to pass similar ballots. They support the proposition because they believe lucrative dialysis companies should invest more into patient care to reduce hospitalizations and improve quality of life for patients. They are heavily outspent 10-1 by several for-profit medical groups and companies, the California Republican Party as well as the California Chamber of Commerce. They mainly oppose because they argue Proposition 29 is redundant and would force clinics out of business.

This proposition is about a wealth tax for environmental programs. Proposition 30 would levy an annual 1.75% tax on all private income above $2 million for ten years. Of that tax revenue, 45% would go to subsidies for electric cars, 35% towards building charging stations and 20% towards wildfire response and prevention.

The fiscal impact, which is only on high-income earners, is estimated to create between $3.5 billion to $5 billion annually.

While this proposition was running, California passed a law in August mandating all cars sold past 2035 must be hybrid or electric. California has also committed to cut emissions by 80% and achieve carbon neutrality by 2045.

This is one of the more polarized propositions on the ballot. While the California Democratic Party supports the proposition, Gov. Gavin Newsom is among those against it. He has called Proposition 30 a “cynical scheme” by Lyft to get public funding.

This proposition is all about a former tobacco law. You may remember back in 2020 when SB-793 banned the sale of most flavored tobacco products. You may have also realized that these products are still available.

This is because a referendum was passed after SB-793, meaning the law was rescinded through a petition and put on the ballot for Californians to decide. Proposition 31 is the name of this vote. Voting yes would enact the law, and voting no would mean SB-793 does not go into effect.

The fiscal impact of this proposition could be huge. As much as $100 million in tobacco tax revenue could be lost if Proposition 31 passes.

Supporters of the proposition, including the California Democratic Party and several medical and anti-tobacco organizations, claim flavored tobacco products should be banned because they disproportionately target minors. Tobacco products are widely recognized to be highly addictive and a major contributor of cancer.