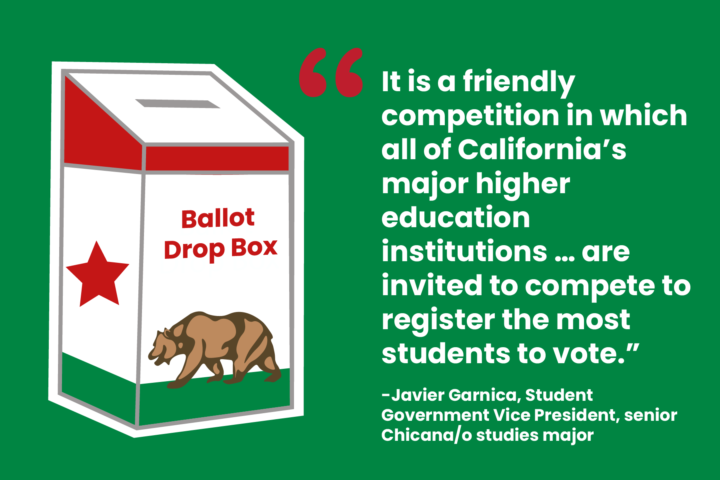 It is that time of year when the leaves begin changing colors from bright green to golden yellow and orange. Pumpkin patches pop up, the days get shorter and the nights get longer. It is also the time to vote in the upcoming election.

Four years ago, in 2018, CI had the highest percentage of students registered to vote in all the CSUs. Student Government President and senior Chicana/o studies and art major Ilien Tolteca said, “We want to show the other 23 CSU campuses that although we may be a smaller campus, Dolphins have the power to make noise against bigger student bodies and care about being civically engaged!”

Voting in the United States is crucial because your vote and others’ help make decisions in your county or district. Your voice can make a difference. Voting for your community is vital because one vote can make a difference with new propositions and elected officials, like the mayor or council members. In the case of the presidential election, most states have the “winner takes all” system, where the popular vote in that state will also become the electoral vote.

It is an important time for everyone, especially the new voters, because this is the first election they can participate in. “Change that has come in past movements has been led by younger people who were willing to take a stand, voice their concerns and take action on what mattered most to them,” stated Tolteca. Even if some people are not eligible to vote, the act of spreading awareness of voting should still be taken into consideration.

Students can participate in the Ballot Bowl by logging into their myCI account and clicking the tab labeled “Register to Vote.” Once on the Voter Registration page, you can begin registering to complete all required sections of the form. You will be asked to add your Social Security Number and your driver’s license number or ID number. Also, understand that your home and mailing address can be your campus address. Once you complete your registration, you will receive an email confirmation. Though the deadline for receiving mail-in ballots has passed, there is still an opportunity to vote in person!

Garnica said, “Your voice matters, regardless of your political party, it is your civic duty as a U.S citizen to participate in your local, state, and national elections.”

For more information and to register to vote, visit https://registertovote.ca.gov/?t=s.