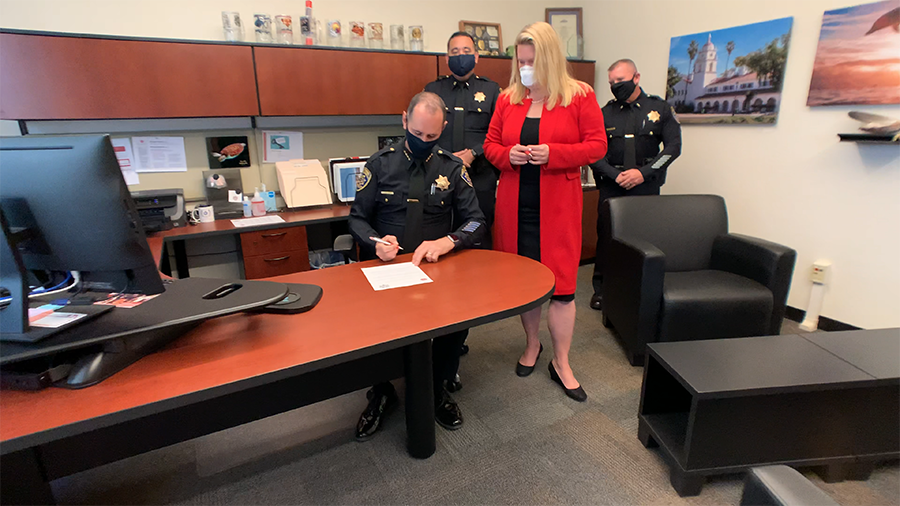 On June 15, 2020, CI sent out a news release that detailed the new pledge made by police chiefs at all 23 CSU campuses. The pledge in question is a change in use-of-force policies that eliminates the use of the carotid control hold to restrain a subject.

The CI View reached out to Michael Morris, Chief of Police at CI, in hopes that he could share more of his thoughts on the change in use-of-force policies.

“We’re (CI Police Officers) a part of the community, we serve the community,” prefaced Morris. “Police departments need to police their communities the way their communities want to be policed in order to be effective. There needs to be a relationship involving trust and confidence between the public and the police. That’s super important or else we can’t be successful.”

Morris ended his statement by stressing that “In order for policing to stay relevant, it needs to evolve over time. It’s important, not only to society to see change, but it’s also important to us, as the police, that we have this opportunity, to pay attention to this opportunity, to hear what society is saying and what the community needs.”

To begin, The CI View asked what the CI Police Department’s stance is on the policy change and if anyone in the department was against the change. “I feel very good about it. I think it’s a wise decision. It (the carotid control hold) creates a lot of risk…it creates a lot of liability. It doesn’t help at all in addressing the matters that our community is concerned about. The last thing we want is to hurt somebody,” explained Morris. “And I don’t think any of the officers are at all concerned about the hold not being available to them anymore…the officers get it; they have no concerns about it.”

The CI View followed up by asking if Morris believes that all 23 CSUs police chiefs will consistently adhere to the new policy change. “Since COVID started, we’ve been meeting virtually every single week,” replied Morris. “So, we all get together, and we all talk about these matters. We pledged to do the 21st Century Policing recommendations, and in the same conversation, we all pledged to remove the carotid control hold from our policy manuals.”

“I can tell you all the chiefs feel the same way about it as I do. Not one chief had any concern with the idea of removing the carotid control hold,” stressed Morris. “I absolutely believe (we will uphold the pledge).”

Morris further explained “In fact, what we have done as a consortium of police chiefs is, we have set up six sub-committees, each one aligned with the six pillars of the 21st Century Policing. We will be doing work on behalf of the entire CSU system to try to help each other in putting together standards and practices that we’ll all be able to use in order to carry forth the recommendations of the 21st Century Policing.”

Additionally, while the carotid control hold has never been used on CI’s campus, The CI View inquired how Morris, as police chief, will ensure that a carotid control hold or any other harmful technique is not used, even with this new policy in place. “We are a very small operation, we’ve got 17 police officers, and that includes me. Someone is not going to be able to do something … without anyone not finding out,” explained Morris. “We are accountable to one another. We have supervisors that pay close attention to the work their officers are doing and ensuring that they are doing high level work in accordance to the rules. If an officer begins doing something that is outside the rules, they’re held accountable. If one of my officers were to use the carotid control hold in the course of their duties, after I’ve made it clear that it’s not authorized, well then, that officer will be disciplined. We hold ourselves accountable.”

For further understanding, The CI View asked if Morris could elaborate on the de-escalation process and what the next steps would be should de-escalation fail. Morris responded by specifying that “de-escalation is not really a step-by-step process, it’s more of a concept.” Morris went on to explain, “De-escalation involves a scenario where the police arrive and insert themselves into a situation, in which somebody is being combative, or violent, or hostile…they need to be arrested, they’re resisting arrest or trying to escape.”

“The concept is, rather than meeting force with force, it’s more about slowing things down, and using other techniques, mostly your words to try to talk the person down. To try to calm them down and get them to voluntarily go into custody or be mentally evaluated,” stated Morris.

Morris continues his de-escalation response by adding that the CI Police Department takes part in Ventura County’s Crisis Intervention Team (CIT), which is a program that helps deal with people who have mental illness issues and is a 40-hour certification course. The CIT program is used by the Ventura County Sheriff’s Department. However, Morris explained that “we’ve made a commitment here at Channel Islands that we will get every single one of our police officers trained and certified in the CIT program. After the training there is ongoing reporting and documentation…to make sure that people don’t fall through the cracks and they can get the help that they need. A big part of the CIT training involves how to identify when you’re dealing with a person that has mental health issues and how to interact with that person the most effectively. A lot of that has to with techniques for de-escalation.”

Regarding  the next step if de-escalation fails, Morris clarified that if “our de-escalation techniques have failed, or while we’re trying to de-escalate, something else happens and now someone is potentially in danger, or the officer is in danger, then unfortunately it may have to evolve into a situation where the officer might have to use some type of force to take control of a situation.

“But when an officer uses force, the intention behind that is not to hurt somebody, or beat somebody up, or to punish somebody. The intention is to be able to gain control of a situation, overcome resistance, and get the person into custody as quickly and harmlessly as possible. And sometimes, that’s just an ugly thing to see. So that’s the last thing we want to do, is to have to use force. So why not use these other techniques to try and prevent that?”