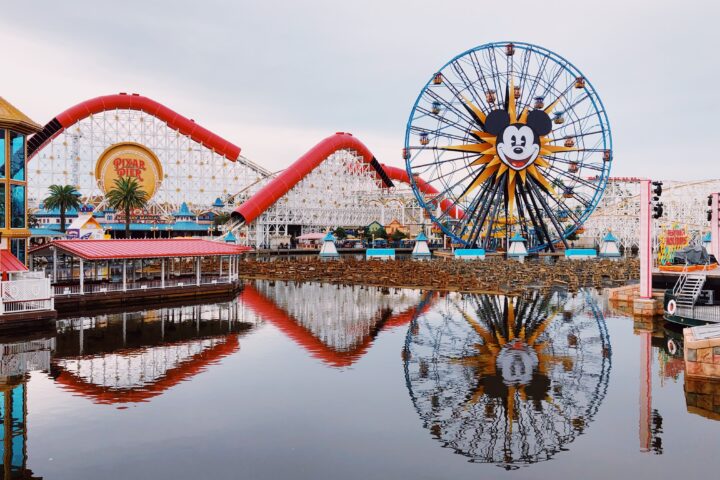 When Disneyland Resort, Disney California Adventure Park and Downtown Disney District closed on March 14, 2020 there was not, and still not, a set date to reopen. As the months dragged on, Disney officials collaborated with the Centers for Disease Control and Prevention and government officials on the steps needed to be taken in order to keep their guests safe while visiting the parks. Because Disneyland and California Adventure are not yet open, we will look at the Florida parks regulations and those that are being implemented in our very own Downtown Disney as well as the current California regulations on reopening individual counties.

Governor Gavin Newsom recently released a statement of a four-tier reopening guideline for California. According to CBS SF Bay Area, the four tiers are color coded with “purple representing the highest ‘widespread’ risk level for a county with more than seven new cases per 100,000 residents and more than 8% positivity rate. Red will represent ‘substantial’ risk, while orange represents ‘moderate’ risk and yellow the lowest level, ‘minimal’ risk, with those lower levels being determined by reduced numbers in case and positivity rates.”

This new tier system has replaced the state monitoring list. As of the writing of this article, Orange County, where Disneyland is located, has moved from the purple to red tier. This leads us to hope for the reopening of Disneyland and other parks in the near future, as the color of a county determines how businesses are able to operate.

It is important to note that Disney parks around the world are not running at full capacity. Some services, such as experiences and attractions, are closed. Guest capacity has been reduced in order to promote physical distancing. Character meet and greets have also seen a change. Characters who are normally out for meet and greets are positioned in a way that still allows for pictures, but at a safe distance.

The Florida parks have decided to run “cavalcades” with different characters dispersed throughout the day instead of running their usual parades. Cavalcades are like mini parades and seem to happen frequently at all parks. These cavalcades are not new to the parks; however, they were a rarity. Disneyworld, prior to COVID-19, had a “Rainy Day Cavalcade” that would run as a replacement for the normal parade when Florida was experiencing inclement weather. The current cavalcades are kind of a replacement for the character meet and greets that, because they are shorter, minimize crowding within the parks.

Shows like “Fantasmic!” and the nightly fireworks have all been temporarily closed. Dining services are encouraging guests to use mobile ordering. Fastpass, which many guests have used to avoid long lines, is also currently down. Because there are so few people in the parks, it is not needed. Another possible reason it is not being used is because the extra queues that would normally be used for Fastpass are being utilized to better the physical distancing in lines.

One of the biggest changes that we are seeing at Walt Disney World is that guests must reserve their visits to the parks and cannot park hop. People can no longer decide last minute to visit a Disney park. The Walt Disney World official website states that guests staying on property in Disney World “can make park reservations for dates during their stay for the number of days that they have valid theme park admission.” Annual passholders are also allowed to visit, but they may only make reservations for three days at a time or for the length of their stay if they are staying at a Disney Resort or one of the select hotels.

Another major change being seen at Disney parks around the world is that guests and cast members must wear a face covering while on the property. Something to note is that guests cannot wear just any face covering. As of the writing of this article, “neck gaiters, open-chin triangle bandanas and face coverings containing valves, mesh material or holes of any kind are not acceptable face coverings.”

The only time guests “may remove (their) face covering (is) while actively eating or drinking,” as per the Walt Disney World guidelines. Different youtubers report that each Disney park has a number of “relaxation zones” where guests can remove their face coverings and safely distance themselves from others.

When entering any Disney park, including Disney Springs and Downtown Disney, all guests go through a temperature screening with no-touch thermometers. Disney has decided “based on guidance from health authorities, anyone displaying a temperature of 100.4 F or above will be directed to an additional location for rescreening and assistance.” People with temperatures above 100.4 F will not be allowed to enter the parks, and neither will their parties. Based on these guidelines it is a good idea to check your temperature yourself before leaving home.

Just like everywhere else in America, Disney is promoting physical distancing of six feet, or two meters. In an effort to make this easier, signage and ground markings are found all over the parks. Queues for rides have ground markings meant to allow for easy physical distancing. It seems that most rides are running at half capacity, meaning that cast members only seat guests every other car or so on rides. Attractions are also cleaned extensively every two hours and sometimes more often if they are in high traffic areas.

Based on the guidelines and regulations in place at Walt Disney World, it’s safe to say the Disney experience won’t be the same for a while. It’s likely that when Disneyland and California Adventure reopen, they will follow the same procedures as the Florida parks. For more in-depth information you can go to the Walt Disney World website and the  Disneyland Resorts site. If you want to visually see the changes being made at the Disney parks, you can also find YouTube videos that people have made specifically for that purpose.