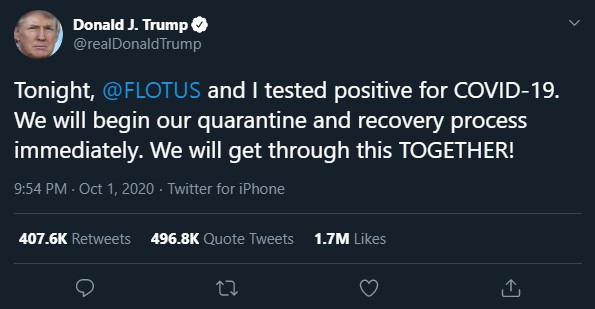 President Donald Trump shared on Twitter late at night, Thursday, Oct. 1 that he and First Lady Melania Trump both tested positive for Covid-19 and would begin their “quarantine and recovery process immediately.” On Friday morning, Mark Meadows, the White House Chief of Staff, shared with reporters that President Trump was showing mild symptoms and that the president would be heading to Walter Reed hospital for doctors to monitor his condition.

This news has stirred emotions across the nation as Trump’s actions regarding the virus have become a key topic in his reelection campaign. Public opinion on the president’s coronavirus response has become drastically divided, with many left-leaning citizens feeling he has not done enough to support and protect the country and right-leaning citizens siding with Trump’s dismissive rhetoric regarding the virus.

The left’s feelings of Trump’s lack of seriousness was further justified by the President’s ridiculing of former Vice President and current Democratic Presidential Nominee, Joe Biden, over his use of facemasks and holding of smaller conventions during the first presidential debate on Sep. 29 — a debate that was dominated by ill-tempered insults from both candidates.

We have yet to see the clear implications of the president’s contracting of the virus, but his reckless actions may have dire consequences in regard to public support depending on the seriousness of his illness. His dismissiveness of the virus that he has maintained throughout the past several months has divided the nation drastically, but as the death toll in the U.S. nears 209,000, his message is not resonating with more moderate Republicans.

Trump attended a fundraiser at his golf club in Bedminster, New Jersey, just the day before learning of his positive virus results; an individual in attendance described the president as lethargic and estimated that he had come into contact with around 100 attendees. It is yet to be known how many in attendance may have contracted the virus, but that will certainly be a topic of focus in the coming weeks.

We have yet to learn exactly what the rest of the election will look like in regards to debates and upcoming campaign events. However, the Vice-Presidential debate scheduled for Oct. 7 is still expected to occur, as current Vice President, Michael Pence, tested negative for the virus on Friday, Oct. 2.

It is hard to gauge exactly what these uncertain circumstances will hold for the future of Trump’s campaign, but many individuals have already begun to anticipate the further politicization of the virus. If the president recovers quickly, it may be used to further support the far-rights notions that the virus is being blown out of proportions by the Democratic Party and could further Trump’s supporter’s image of the president as an all-knowing and undefeatable leader, similar to that of Vladimir Putin.

We have no evidence to support either of those claims that have been circulating around social media, but in a time filled with heightened political conspiracy and consistent claims of false news, it is worth the thought.

It is hard to dismiss the idea of karma as Trump has continued his pace of political aggression and science-denial, as many families are nearing a holiday season with heavy hearts due to the gaps left by loved ones who have passed due to Covid-19.