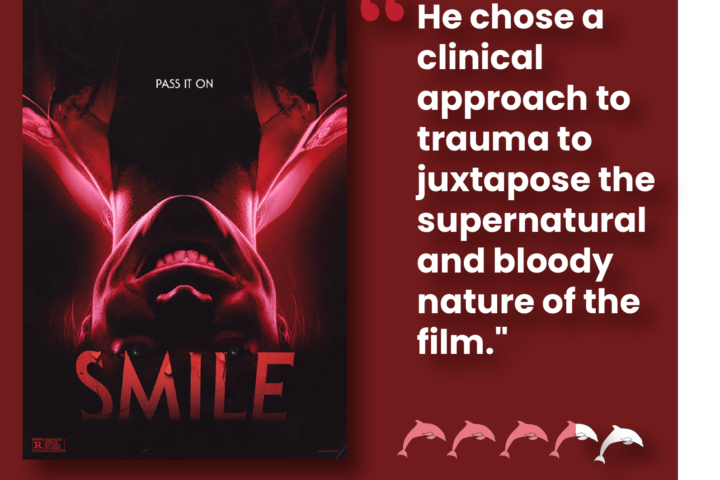 “What makes you smile?” This is the tagline for “Smile,” the latest foray into the horror genre by Paramount Pictures. “Smile” was directed and written by Parker Finn, better known for his short horror films like “Laura Hasn’t Slept,” which this movie is based upon, and “The Hidebehind.” It is a supernatural horror thriller about a psychiatrist, Dr. Rose Cotter, who experiences a harrowing incident with one of her patients. After this incident, Rose finds her life turned upside down as she is haunted by a malevolent entity. This entity wants nothing more than Rose’s life. She must fight back against this entity or she will end up as another one of its victims.

Sosie Bacon stars as our main character, Dr. Rose Cotter. Bacon is best known for her role in the TV show “13 Reasons Why,” where she plays Skye Miller. Rounding out our cast we have Kyle Gallner as Joel, a cop and Rose’s ex-boyfriend who helps her battle the entity. Gallner is known for his roles in “Veronica Mars” and “Smallville,” and for his movie appearances in such films as “American Sniper” and “Jennifer’s Body.” The movie also features Gillian Zinser as Holly, Rose’s older sister; Jessie T. Usher as Trevor, Rose’s boyfriend; and Kal Penn as Dr. Morgan Desia, Rose’s boss and head psychiatrist.

With a score of 77% on Rotten Tomatoes and a score of 7/10 on IMDB, “Smile” is shaping up to become a box office success. Bacon shows off her amazing acting abilities as Dr. Rose Cotter, a woman haunted by trauma who is slowly driven insane by the malevolent force only known as the smile entity. The acting of her costars is subtle, if not one dimensional, but this choice could have been intentional on Director Finn’s part as a way to highlight the divide between Rose and the people around her.

The main element that drew me into the movie was the cinematography. The camera angles show a huge city landscape and tactical close-ups to make you feel small at times and then confined at other times. A well-used method throughout the film is the technique of inverting camera angles so that you see the city from an upside-down point of view or from side angles. By inverting the landscapes, you see the world as askew. This puts you into the mindset of Rose. The reality that you are seeing is not the same as everyone else’s.

Another great technique used in the film is the use of light and shadows to frame different scenes in the movie. The director contrasts the world into these two aspects. Sometimes these scenes are subtle. The shadows engross upon the light ever so slightly, but at other times you can blatantly see the use of this technique. This ever-changing contrast puts you, the audience, on edge. You never know what might be lurking in the darkness. At other times, you think you are safe in the broad light of day, but that belief is not for certain.

Besides the cinematography, the movie makes great use of sound design to make the audience feel on edge. You are already in an unsettling atmosphere, but tension mounts as you hear cat food squishing into a bowl — the sudden blast of an alarm startles you from your concentration. Even the sound of silence becomes a deadly threat. The use of camera angles, sound effects, the mounting score and close-up shots are all parts of the architecture of the scare.

If you’re into gratuitous violence, “Smile” has plenty of that. The movie boasts many disturbing scenes. Its horrifying deaths can be nauseating at times. Some of the violence is so gory that it can come off as surreal at some moments. Be warned though, there are acts of suicide and self-harm.

I must mention that although this film is about the mental decline of the main character, it has horrible treatment when it comes to mental health. Most of the characters use derogatory words when it comes to the mentally ill. Phrases such as “nutcase,” “unhinged,” “fruit loops” and “crazy” are tossed around by characters regularly. This could be an attempt on the director’s part to show the obvious problems when it comes to the public’s view of mental health and the mentally ill. If so, I believe he went down the wrong path. The use of these lines is cringe-inducing and does not help the performance of the actors.

If I were to describe the feel of this movie in one word, I would say that it is clinical. “Smile” presents us with an otherworldly creature in the smile entity. It also shows the slow decline into madness as the main character struggles to fight off this entity. Finn could have used any number of lenses to frame this story. He chose a clinical approach to trauma to juxtapose the supernatural and bloody nature of the film. He has his characters act in a polite and concerned manner to cover up their obvious misgivings of the situations at hand.

This gives us insight into the main character’s positions and feelings. Trapped, alone and frustrated. Picture yourself in trouble, yelling for help as people walk by noticing you but ignoring your pleas for help. This is what Rose Cotter feels throughout the story.

The sets themselves are also clinical in nature: sparse decorations, with every object put neatly into place. The absence of disorder emphasizes the acts of sudden chaos. It is only when disorder reigns supreme that we truly find ourselves going down the proverbial rabbit hole. The disarray of clothing, the smashing of objects and the move from artificial structures to areas of nature. All in all, I give “Smile” 3.5/5 Dolphins.